Motorhead is an amazing rock band – let’s face it. With over two decades at the forefront of alternative music and as an influence to all of the best and brightest modern talent, one would be hard pushed to think of a more important band for heavy music over the time that they have been together. Of course, Motorhead wouldn’t be in the position that they are today if it wasn’t for their iconic vocalist (and part time sex maestro…apparently), Stoke-On-Trent’s Ian Fraser Kilmister aka Lemmy. 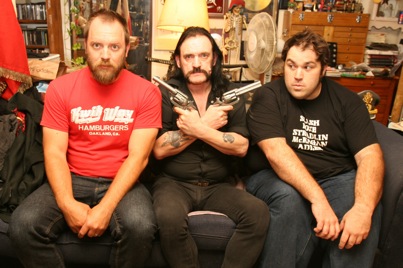 This rockumentary is a fitting tribute to this guy’s “every-man” approach and musical genius. Over an hour-and-a-half passes as the frontman is “bigged up” by the cream of rock including Dave Grohl (Foo Fighters), Alice Cooper, Slash and Ozzy Osbourne. It’s mental really, because while people might list Elvis and Kurt Cobain as rock icons, it’s obvious from this piece that few come as close to the real thing as this bourbon and coke-fuelled legend. Despite all of the praise heaped upon him, the times that we see Lemmy, he appears considerate, open and reflective about his “hardcore” years of playing, sha**ing, drinking and doing shed loads of drugs – he’s comes across as the ultimate professional rocker.

Some of the most interesting moments of the film come when specific rumours about Kilmister’s lifestyle are laid to rest, most entertaining perhaps is the moment he dispels rumours of Nazism (he has a rather large collection of swastikas and uniforms) by saying that he’d be a pretty bad one because he’s had five black girlfriends. “If the Israeli army had better uniforms,” he says. “I’d collect them instead.”

Over the three years that filmmakers, Greg Olliver and Wes Orshoski, followed Lemmy around they appear to have perfectly captured his “essence” and as a result exposed his affecting personality so that fans of all ages can see a side of him that they probably were not aware existed. This film doesn’t bullsh**, you get everything, from Lemmy in a tank, to a viewing of his tiny home in Hollywood – it’s an altogether entertaining and informative body of work. Lemmy, we salute you as you continue to rock on into the new decade.