Trailers for ‘2 Guns’ have it come across as a slick and gag-filled caper full of smart dialogue and fast talking, and while it’s perfectly serviceable in all these areas, it’s hard not to feel like you’ve been conned a bit. Director Baltasar Kormakur approaches the film as a sort of Tarantino tribute, and it runs off a very similar kind of atmosphere right from the beginning.  Actors Denzel Washington and Mark Wahlberg are both accomplished, and the interplay between them is very well engineered as they seem to be on the same page from the off, but there’s always an edge missing from the dialogue that doesn’t elevate it above average buddy cop movies. 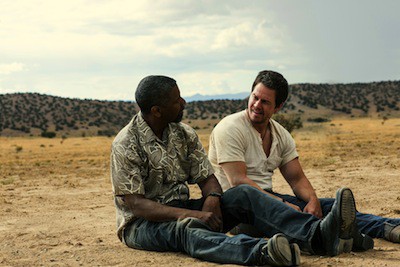 Kormakur and screenwriter Blake Masters attempt to build an intricate web of intrigue that loses itself in its many twists and turns and never quite gets a grip on characterisation. The script really falls apart trying to explain itself and it’s very easy to get lost in the intricacies and forget completely why the characters are doing anything at all. Paula Patton’s character is a mess, switching between femme fatale and hapless damsel every time her character appears on screen which quickly becomes tiresome and her odd sideplot element is simply a waste of time. Even Washington seems tired any time he comes in to contact with her character, and the chemistry is very strained to say the least.

A great turn comes from Bill Paxton as a no-nonsense CIA agent who provides a lot of the entertainment in the film. His interactions with other characters are also some of the most interesting areas of a film in desperate need of a standout figure, which he quickly becomes. He also epitomises Kormakur’s desire to emulate Tarantino as he brings out much of the sarcastic, violence-fuelled humour that Tarantino is in such command of.

‘2 Guns’ isn’t as good as you’d like it to be, and certainly doesn’t compare to slicker efforts by other people (as well as Tarantino, check out David Ayer’s ‘End of Watch’) but it’s perfectly serviceable stuff that provides a mildly enjoyable way to spend a couple of hours.