The idea of only having Robert Redford looking varying degrees of stressed for almost two hours sounds appealing to some people, and horrible to others. Director J.C. Chandor’s latest film ‘All Is Lost’ does just that though, as we’re plunged in to the water with only the ginger icon for company. Heaven it certainly isn’t, but Chandor’s film is suitably tense and is bolstered by a very strong performance from Redford, as together they provide us with a sort of maritime ‘Gravity’ that maintains an air of tension and manages to be gripping for large periods despite, or maybe because of, its stripped down style. 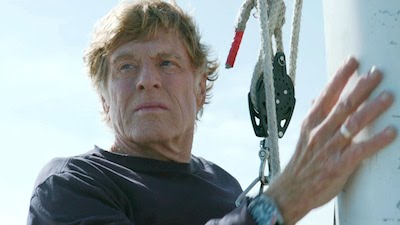 Redford’s performance is full of a gruff reality that it could be argued is not present in Alfonso Cuaron’s aforementioned galactic adventure, and thus the emphasis is not on the gigantic scale, but on the small as we follow Our Man, as he has been called in the credits, and his attempt to survive on his simple sailing boat amidst an expansive ocean that manages not to become the centre of attention at all. His personal struggle makes for all the inspiring viewing you could need, meaning we get very little in terms of sensationalising the surroundings, and this is in large part down to the larger than life performance that Redford puts in.

‘All Is Lost’ may run slightly too long and is certainly an exhausting experience but Redford’s performance and some stellar direction from Chandor make it a gripping and powerful experience. It works as a great counterweight to the over the top magnificence of ‘Gravity’ and is a lot less set on visually impressing you than something like ‘Life of Pi’, instead utilising a gritty outlook and unrelenting realism. Chandor is a talented director, and having made the incredibly wordy ‘Margin Call’ in 2011 it looks like he is ready to have a go at anything. The risk here was definitely that we would be treated to two hours of dreary cliché, but he avoids it well and manages to make a film with about three words of actual dialogue and a short voiceover just as gripping as those scripts that have at least a hundred pages more and that’s definitely an achievement. It is ultimately a masterclass in minimalist film-making and deserves the plaudits it’s getting, even if it isn’t quite as brilliant as some make it out to be.