Marking the directorial debut of Joe Cornish from cult TV smash ‘The Adam And Joe Show’, ‘Attack The Block’ is also being heralded as the next ‘Shaun Of The Dead’, coming from some of the same producers. While it manages to balance laughs, chills and genuine genre appreciation as impressively as Edgar Wright and Simon Pegg’s 2004 fave, ‘Attack The Block’ also squeezes in enough adult drama and mature social commentary to truly distinguish it from the trashy sci-fi flicks and hoodie thrillers it resembles on the surface. 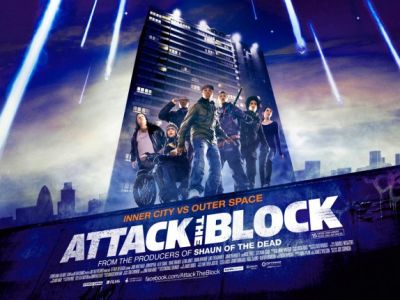 Jodie Whittaker stars as a young nurse who falls prey to a group of five youths on the way home to her South London tower block. Their callous brutality is interrupted by something falling from the sky, crashing in a nearby car in a flash of blazing light. With their attention distracted by this new opportunity to loot and pillage, the group are caught off guard by a vicious creature of unrecognisable origin, which they proceed to duff up in their own inimitable style. It transpires the beast is only the first visitor to their neighbourhood; as the night grows late the group must fend off disbelieving police, rival gang members and an army of alien horrors, eventually finding an unlikely ally in their previous victim.

This inspired hybrid of 80s kiddie-horror and modern chav comedy succeeds on each of the many levels it works on. The serious scenes – primarily at the beginning and end – are handled with integrity, the initial robbery being uncomfortable for how familiar it should be to anyone who has lived in a city, while the perpetrators’ eventual realisation that their actions are self-defeating is well-handled and sincerely played. Elsewhere, the young cast are laugh-out loud funny without descending into caricature; Cornish somehow manages to make their wanton destructiveness heart-warming and hilarious. The ‘stoner comedy’ element featuring Nick Frost and Luke Treadaway is perhaps the film’s weakest and most formulaic element, but still manages to be crowd-pleasing while offering respite from the film’s surprising intensity.

Make no mistake, ‘Attack The Block’ is first and foremost an action thriller, with several excruciatingly tense sequences and a handful of perfectly orchestrated jumps. Cornish shows he has paid real attention to his heroes; taking his cue from John ‘Assault On Precinct 13’ Carpenter and Walter ‘The Warriors’ Hill, he manages to keep the film edge-of-the-seat exciting while still peppering his script with belly-laughs and social commentary. Through ingeniously minimal creature design and a series of expertly-mounted suspense set-pieces, Cornish gets maximum impact from his obviously low budget, helped no end by atmospheric lighting and stunning cinematography that renders the rain-lashed streets as hostile, barren landscapes and the looming high-rises as dystopian monuments. The score also manages to reference urban music trends while still supplying a suitably sci-fi b-movie atmosphere, and several scenes feature impressive stuntwork incorporating urban sports such as free running and BMXing.

Cornish cleverly fleshes out his characters on the fly, giving us insight into their lives through fleeting glimpses into their homes, mostly avoiding unnecessary exposition to keep the pace from lagging for the perfectly timed duration. It’s the flipside to recent hoodie horrors like Eden Lake and Cherry Tree Lane, despite Jumayn Hunter showing up from both to provide some well-utilised menace. As the gang’s leader, John Boyega is especially impressive, making a convincing transition from hard-done-by teen terror to repentant hero, while Jodie Whittaker works as an appealing foil to the younger cast’s hyperactive nature, her gradual begrudging respect for them mirroring the audience’s own exponential involvement in their fates. Cornish should be commended for setting up such familiar stereotypes only to de-construct and humanise them over the course of his film; he manages to make his juvenile delinquents sympathetic without pandering to the audience. Overall though, ‘Attack The Block’ is just a storming good time, an all-British blockbuster that can’t fail to entertain and will surely lead to bigger things for all involved.