The cast list for this, the most recent adaptation of a Tracy Letts play, is of such a high calibre that it’s hard to believe that one movie pitch could attract everyone associated with it. Meryl Streep, Julia Roberts, Benedict Cumberbatch, Ewan McGregor and Chris Cooper are perhaps the most prestigious, but others such as child prodigy Abigail Breslin and the indefatigable Sam Shepard deserve mentions too. With the wealth of talent that director John Wells had to work with it seemed only fair to assume that this ensemble piece would utilise its actors to the fullest. 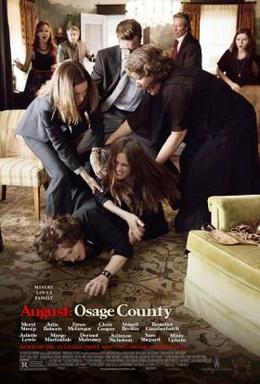 As a play, ‘Osage County’ was praised both by critics and audiences for being an intense, amusing and vivid experience that refused to let go, and that is very much what Wells goes for with this adaptation. It’s flowing with neurotic performances that drip with bitterness, jealousy, malignance and general unpleasantness, best encapsulated by Streep’s performance as the family’s matriarchal character, Violet. She’s firing on all cylinders as Streep unleashes her demented side the like of which we only saw smatterings of in films like ‘Adaptation’, spewing and depressing with almost her every word. She’s offset by the stern, strong-willed Barbara as played by Roberts, whose relationship with her mother is more of an anti-relationship as they argue and insult each other almost constantly which leads to some amusing scenes and some downright disturbing ones.

The two are ably helped by the rest of their family who are all on the horrible scale to varying levels, from the sleazy Steve, played by Dermot Mulroney, to Chris Cooper’s Charles, arguably the only one of this lot you’d actually want to be in your family. While laughs are there in the resulting two-hour shouting match that essentially occurs between the fifteen or so accomplished actors, the squabbling and bafflingly nasty remarks can also be jarring, disconnecting you from everyone involved and almost forcing you to see everyone as a poor caricature of a real person. Streep and Roberts epitomise this, although everybody in the family has an element of it in them that just serves to make you stop caring after a while as the shenanigans continue at such a ridiculous rate that you’re not quite sure if the film wants you to laugh at the sheer amount of scenarios present within the gathering or whether it’d rather you appreciated the dramatic value of these, because the value ceases to be there once the more ridiculous plot points come to the fore, and all you’re focused on is how good an American accent Benedict Cumberbatch pulls off.

This proves to be the saving grace for ‘August: Osage County’. It may be far too in love with itself to actually interest anyone in the plot for longer than half an hour and you may have to spend a couple of what start to feel like unbearable hours with these horrific people, but boy do the cast give it their all. There isn’t a dud performance there, and it’s refreshing to see everyone bringing out their A-game. It becomes easy to see why Streep and Roberts are nominated despite the script’s shortcomings, and these performances are at least two thirds of the reason why the film manages to be funny enough to get you through. ‘August: Osage County’ is by no means perfect, and it may start to wear on you when you realise you can’t connect with anyone or anything involved, but it remains watchable thanks to the sheer force of will of the acting performances. One thing’s for sure, your own family looks a damn sight better after this film.