Woody Allen makes films at a rate many others in the industry are unable to keep up with, with this being his twelfth film behind the camera since 2000. Last year’s ‘To Rome With Love’ represented an unusual dip in quality for the seasoned auteur, so expectations may have been even higher for Allen’s latest feature. Indeed, ‘Blue Jasmine’ represents a change in tone from recent films, and 2011’s masterful ‘Midnight In Paris’ feels like it was years ago as Allen finally leaves the homages to Europe behind to focus on a more personal story. 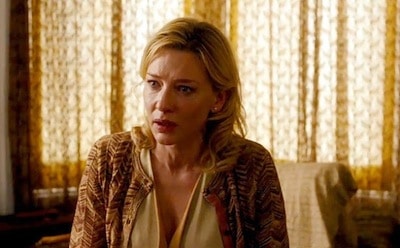 ‘Blue Jasmine’ contains many themes common to Allen films. Relationships and family conflict, depression and a philosophical approach that has become synonymous with his name. But ‘Blue Jasmine’  also has a much darker tone than recent efforts as we follow Jasmine’s mental breakdowns, unending snobbishness and attempts to resurrect her once glamorous life, fantastically portrayed by Cate Blanchett, who encapsulates all the eccentricities of the character in what is a very large, screen-filling performance that clings to you and doesn’t let go.

It is truly the focal point of the film, and she no doubt evokes the spirits of Blanche from Tennessee Williams’ ‘A Streetcar Named Desire’ and her performance in the theatre as her in 2009 as she harbours many of the delusions of grandeur that Blanche does, together with a fragile mental state and a sense of entitlement that she belongs in the upper echelons of society, looking down on everything in her sister Ginger’s life. Allen portrays all this with his usual dialogue-dense intensity, and makes it very easy to get lost in as you take in different points of view and in to everyone’s world as Jasmine’s conflict spawns many other conflicts around it. This, as usual with Allen, is very well done and makes for a captivating watch as he pairs conflicting personalities and conflicting stories together, bolstered by fantastic performances not just from Blanchett but from the likes of Sally Hawkins and Alec Baldwin, the latter in particular excelling as the businessman husband of Blanchett’s Jasmine, slick, oily and corrupt in more ways than one.

Its humour, while derived in a vastly different way, is still just as effective and just as well-used as in Allen’s best work. Here, however, rather than having an almost light-hearted tone to it, it is certainly a lot more biting and much darker as is understandable when considering its subject matter. As an examination of someone’s fall down the social ladder it’s fantastic at portraying the strains this places on someone who has no idea how to deal with her new surroundings, someone who only knows wealth but does not really have a lot of the things people would value in life: love, fulfilment and as a result, happiness.

It becomes a bittersweet examination of her interactions with ‘normal’ people, which when linked to her increasingly desperate attempts to integrate herself in society makes for even more comparisons to Blanche, and many though crucially not Allen himself, point to things like this as being the pointers that suggest that this is almost a re-imagining of that famous tale. No matter what it is in that regard, it is certainly a highly successful effort that is only really let down by some pacing issues that do make the film feel longer than it is. Despite these more dispensable performance, it is definitely successful and Cate Blanchett’s performance will take some beating if anyone is going to stop her from getting her hands on the most prestigious golden man in film. Roll on next year’s film Woody.