By Sep Gohardani May 8, 2014 Film, Reviews
No Comments

Getting a film funded on something like Kickstarter is a tough task when you aren’t a popular and bankable name like Zach Braff or Kristen Bell, or continuing a long-running franchise with a pretty large fanbase. In the case of ‘Blue Ruin’ it proved enticing enough to raise the money required for underground director Jeremy Saulnier to make it the way he wanted to, and the result is a stripped down, refreshingly bare thriller that grips all the way through without ever feeling like it forces the issue thanks to brilliant direction and cinematography by the multi-talented Saulnier and a quietly giant performance by Macon Blair as main character Dwight. 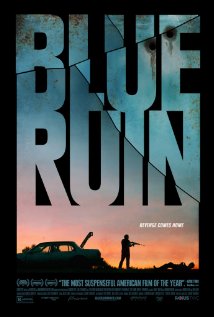 Saulnier isn’t known for this sort of film at all, and indeed his filmography boasts the likes of splatter-horror/comedy ‘Murder Party’ but the cult film-maker has created something that comes across as intelligent and thoughtful, often conveying thoughts, feelings and situations through long sequences where the characters, and particularly Blair’s Dwight, don’t actually say anything. These sequences give us an insight in to his lifestyle, and exacerbate the effect of the shock he gets when it comes at the start of the film, something we don’t know for a little while but we know is a hugely portentous event. The way the whole revenge story is handled is very well done, it’s almost mundane the way he goes in search of a gun in the same way you would go to the shop for milk, and that’s where the humour comes from, pitch black in nature and played totally straight, it breaks the tension very nicely and gives the film another welcome dimension.

‘Blue Ruin’ is intense, convincing and thrilling and is a mark of just what crowdfunding can achieve even when there are no big names attached and the only thing to attract you is the story itself and the determination of those involved. There’s definitely a higher expectation for any future projects that Saulnier and Blair make, and they’ll definitely be happy that they’ve managed to make such a mark with this film. Admirable throughout and mostly successful as it is. A chilling, darkly amusing, thrilling revenge story of the kind we rarely see these days.