This film marks the return of Hollywood stalwart Steve Spielberg to the director’s chair, with 2012’s ‘Lincoln’ being his most recent effort, and it’s overdue. Sure, the world’s most renowned Hollywood behemoth is prone to releasing by the numbers money-gobblers in the mould of films like ‘Hook’ and the disastrous fourth Indiana Jones movie, but he has also proven himself to be a masterful director of unabashed, original blockbusters like ‘Jurassic Park’ and powerful tour de forces like ‘Saving Private Ryan’. What he delivers here is a drama that leaves you on the edge of your seat until the very end, even if you know the true story it’s based on. 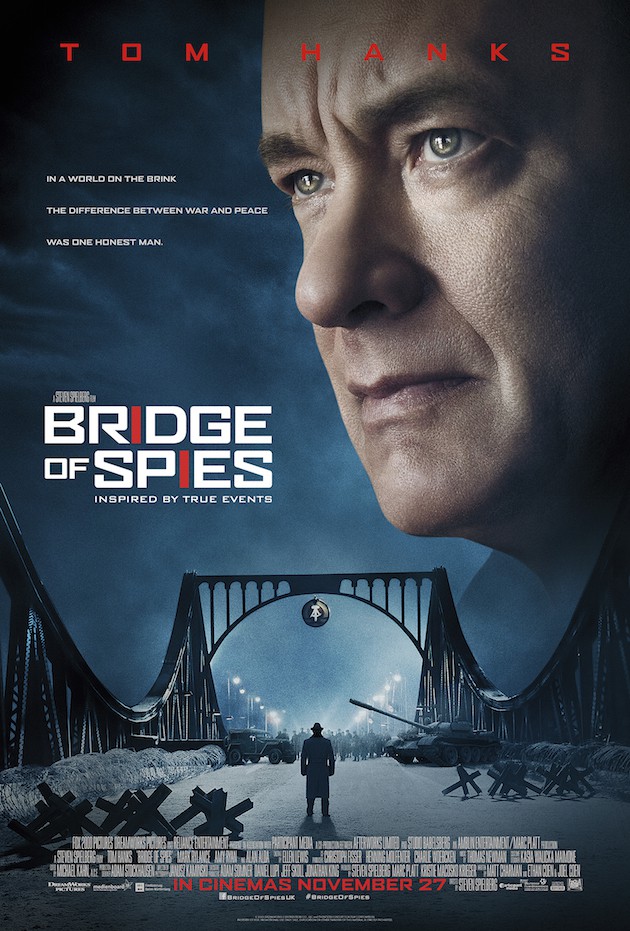 Tom Hanks, who plays James B. Donovan, an insurance lawyer who is sought out to defend suspected Soviet spy Rudolf Abel at the height of the Cold War, delivers an excellent performance. It’s right in his wheelhouse of course, his character is the one that strives to do what is right against what is easy against adversity, and goes on to do that throughout the film, but those awaiting the day when he is not able to carry a film on his shoulders will be disappointed, as he is thoroughly captivating throughout.

He does not have to carry it alone however, because Mark Rylance is equally fantastic as Abel. Their scenes together make for some of the best of the film, understated, powerful and often funny, it’s hard not to fall in love with Rylance’s portrayal of a man that could so easily have been portrayed as thoroughly unpleasant but whose humanity is allowed to shine through. Rylance also does a wonderful job with a difficult accent, Abel’s diverse life meaning that his speech is affected by various regions of the world to make quite a unique portmanteau of dialects.

Those expecting a courtroom drama here will be disappointed. That aspect of the film is dealt with fairly quickly, with Spielberg preferring to concentrate both on Donovan’s insistence on giving Abel the proper representation and also the eventual culture shock Donovan gets when he must negotiate a hostage swap with the Soviets. As a result, having spent most of the first half of the film dealing with the repercussions of Donovan’s decision to follow the letter of the law, we are then taken through what his actions have meant for this potentially momentous exchange, and how he goes about facilitating it. It’s a story that is wonderfully told, Spielberg making use of the cinematic setting to drive points home with fiction, but maintaining the essence of the true story so its remarkable nature can still shine through.

One of the films of the year, ‘Bridge of Spies’ may be made in the mould of an old-fashioned Hollywood espionage thriller, complete with smooth jazz and quiet discussions in atmospheric pubs, it’s much more than that. Its combination of excellent cinematography by Spielberg stalwart Janusz Kamiński and wonderful performances help towards constructing a film that deals with its issues cleverly and is riveting to boot. It does of course have its flaws, its portrayal of East Berlin is not quite as impactful as it could have been and some of the Soviet and East German characters are dealt with in broad strokes, but it overcomes this by presenting the different points of view and ensuring that the cynical, distrustful nature of all sides are examined, and ultimately represents another success for Spielberg in a distinguished career.