Ever since Paul Greengrass wisely refused to continue making Bourne films, thus not taking any responsibility for the drab fourth offering, it was always going to be interesting to see what he had planned next.  ‘Captain Phillips’ is an adaptation of the story of the real-life sea captain whose cargo freighter the Maersk Alabama was hijacked by pirates in 2009, and offers plenty of opportunity for Greengrass to experiment with his talent at creating a relentless, lasting tense atmosphere that he became so good at perfecting. Considering this film’s long runtime, he was always going to have to excel to ensure that it maintained its watchability and that the conflicts were developed and intriguing enough to be interesting. Since it is Paul Greengrass, that’s exactly what he does. 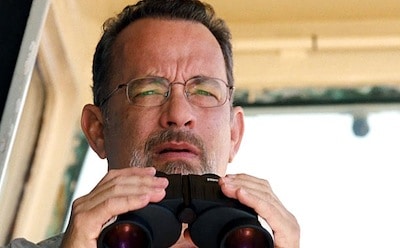 Bolstered by a great performance from Tom Hanks in particular, Greengrass’ directorial prowess means that the film never loses its intensity or its power, and Hanks is consistently fantastic throughout, making him an early shout for a nomination at next year’s Academy Awards. Hanks exudes a powerful charisma that makes him captivating to watch in a lot of things, but this is really him at his best, pulling out all the stops both emotionally and dramatically.

Great performances from not just Hanks, but first time actor Barkhad Abdi whose role as pirate captain Muse is consummately performed for someone who has just started out as an actor, and credit must also be given to Greengrass once more for ensuring that he makes the most out of it, could still have given way to a script that devolves in to Hollywood cheese at any point. While this film is by no means as strikingly new in terms of viewpoint as films like ‘A Hijacking’, a Danish film with a very similar premise that is currently one of my favourites of the year, it ensures that the tale is more about the strain both sides are under than any aspersions as to who is really the good guy and why they must do it for their country, and that definitely is welcome.

These tensions, fantastically captured by cinematographer Barry Ackroyd, ensure that there’s always an uncomfortable knot in your stomach, and the sheer intensity of the situations emanates through the screen and right in to you as you find yourself fidgeting nervously in your seat, so Greengrass can only be commended for that as well, since he fulfils just what he set out to do.

‘Captain Phillips’ is a success in more ways than one. It’s a consummate example of how to pace a thriller correctly, it’s fantastically cast and very well acted, and it never leaves you bored. The only real issue is that while you’re never bored, it doesn’t quite feel like you’re reaching the level of knuckle-biting tenseness that it perhaps could have had, and it could well have emanated more if it had been a 15 certificate, but as it is it’s certainly worthwhile and a strong addition to Greengrass’ filmography as well as to Hanks’ reputation as an actor that can manipulate the audience exactly to perfection. Definitely a worthwhile watch.