With the start of awards season comes the fanfare about all the likely nominees, and if the recent Golden Globe nominations are anything to go by, it looks like ‘Carol’ will be doing very well indeed. It has been nominated in five categories including best film, best director and best actress for both Cate Blanchett and Rooney Mara to add to the litany of other award nominations and wins that the film has had thus far. Todd Haynes is known for being an idiosyncratic director whose films are thought provoking but challenging. ‘Carol’ marks his return to the big screen after 2007’s ‘I’m Not There’ which also featured Cate Blanchett who basically plays the female embodiment of Bob Dylan in a film that endeavours to tell the story of part of his life. This film isn’t quite as complicated, ditching the non-traditional narratives and focusing on a story, based on Patricia Highsmith’s highly significant novel ‘The Price of Salt’, that’s beautifully told and deftly made. 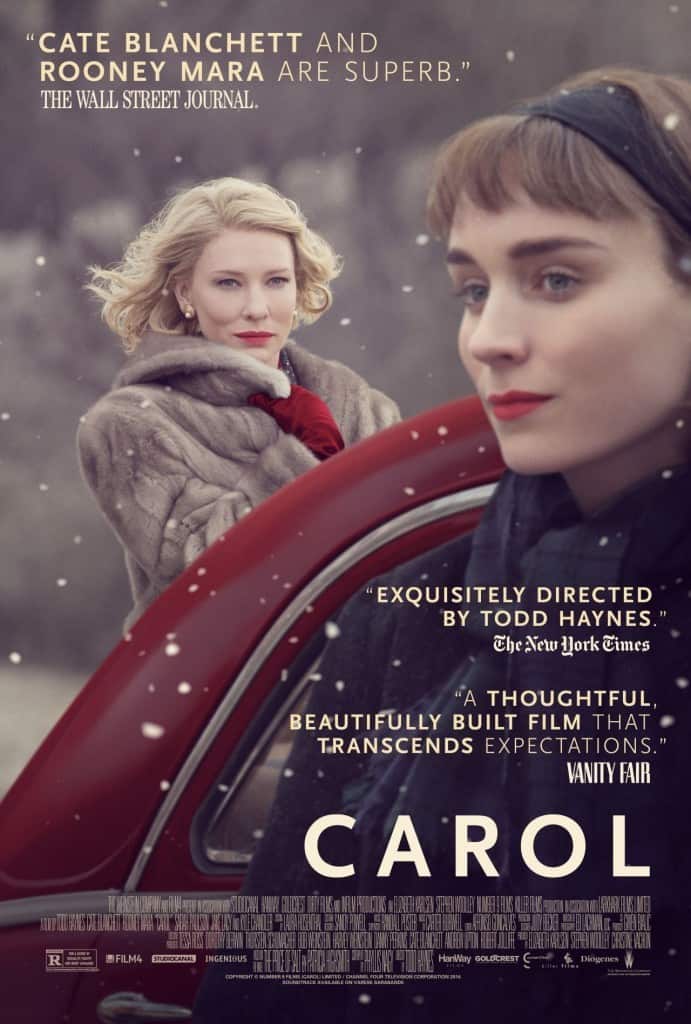 Haynes direction here is understated. It doesn’t have that atypical stamp that previous films of his did, his quieter approach along for the nuances of the story and the acting performances to take centre stage. The titular Carol is played by Cate Blanchett, in riveting form as usual, giving a performance that is at once icy and fragile. Haynes knows when to do a close-up to capture the quality of Blanchett’s work, her face tells you far more over the course of the film than Phyllis Nagy’s excellent script could.

Rooney Mara is also excellent in her role as Therese Belivet, whose character development mirrors Carol’s and counteracts Blanchett perfectly. Haynes acknowledges the painstaking journey both characters have to make as a result of the time they are living in (the film is set in the 1950s) and makes sure it is clear that the film isn’t just a romance, it’s a film where that very romance also mirrors a crime, giving the story that extra dimension and heft.

‘Carol’ may not have the weight of a lot of films about similar topics, but it was never about that. It’s a considered and realistic portrayal of the genesis of a relationship and the affect that has on the two involved but also on those around them, and even the society in which they live, in whatever little way that may be. It may not have enough to get the teeth stuck in to for some, and it could be said that it often relies on Edward Lachman’s excellent cinematography and Carter Burwell’s memorable score to maintain its power, but it’s an admirable achievement and a good place to start for those looking to get in to Haynes’ other work.