Jon Favreau makes his return to the director’s chair in an ode to food that seems very close to his heart, and it’s often that that level of enthusiasm can be richly rewarded with a film that’s packed with heart and verve. Even though ‘Chef’ suffers a bit in terms of filling its 114 minute runtime and sometimes can devolve in to being an exercise in over-indulgence, it definitely has both heart and verve which together with some solid acting performances and a laid back atmosphere makes the film an amusing, easy food-filled ride that keeps its sense of fun even through its more uneven moments. 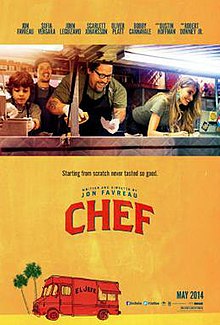 The food is so prominent in the film it would be a hugely unwise decision to go in to the cinema on an empty stomach since you’ll end up salivating so much you’ll drown the other cinemagoers, which is probably not something they want to experience. The montages appear from the very start as food is sliced, diced and pressed suggestively to happy jazz and some Cuban salsa, all feeling somewhat like an advert for some mouth-dribblingly good restaurant, but it soon becomes part of the fun of the film. It’s so enthusiastic about food that some of the dishes are almost leered at seedily, and the orgasmic reactions are ramped up to eleven in a way that would make the hungry amongst the audience scream with frustration.

It features small roles for Scarlett Johansson and Robert Downey Jr, both of whom do their jobs well, and great turns from Favreau himself, John Leguizamo and Bobby Cannavale ensure that the chemistry built between the characters never feels fake. A mention must also be given to young Emjay Anthony, who is much more reliable than the average child actor and does a good job as Favreau’s on screen son Percy.

Sometimes all you need in a film is unadulterated fun, feel-good vibes that leave a smile on your face and never feel exploitative. It may not be particularly groundbreaking and certainly isn’t anywhere near the best film of the year, but it’s a good-natured and charming film that only becomes a little self-indulgent at points and maybe utilises its Twitter gimmick a few times too many, but has the edgy script and strong performances to more than make up for it. Of course, if you just want to see some food on a screen for a couple of hours, then you damn sure get your wish, it’s food porn of the highest quality. Eat a sandwich before you go, or face the stomach-rumbling, lip-licking consequences.