Horror, as a genre, can go either of two ways; the first is to shock and amaze the way classics such as ‘The Ring’, ‘Jaws’, the original 1963 version of ‘The Haunting’, ‘Don’t Look Now’ and even the first ‘Saw’ movie. These films recognised the maxim of “less is more” and devoted a great deal of time on build up and suspense to startling effect. The second is over saturation of gore and blatant shock tactics to which most audiences have become immune. ‘Chernobyl Diaries’ is a mixture of both of these. 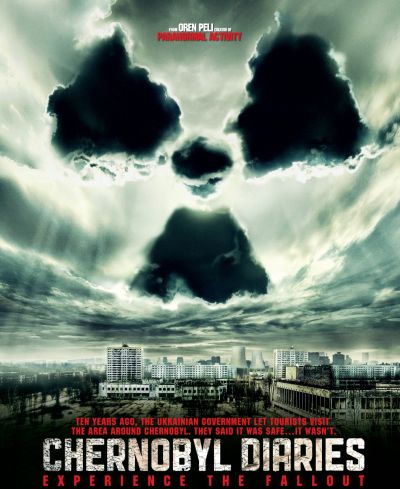 To kick off the dialogue is dreadful, it aims to create a naturally realistic representation of a group of young adults travelling the world and up for a bit of adventure and struggles greatly with this, the “bromance” between the lead brother characters is only believable to a degree and the stereotyped females (one busty blonde and one cautious brunette) makes one groan whilst yawning. Yet we didn’t enter this movie with the expectation of snappy Aaron Sorkin or Cohen Brothers-style dialogue. The trailer told us that much.

Now, where ‘Chernobyl Diaries’ succeeds is the aforementioned “less is more” approach. The build up is good, not too drawn out and doesn’t throw the audience straight into the madness so, in this regard, the pacing is just right. The “radioactive soviet zombies”, as we have suitably named them, are never completely seen and, just as ‘The Haunting’ did in 1963, banging, scraping and… shadows moving create the suspense and keep us on the edge of our seats.

The “jumpy” moments are actually pretty effective too. What we were most impressed with was the cinematography and set design, Diaries was shot on location in Serbia and Hungary and made up to represent the local town of Pripyat in Chernobyl and the location does look fantastic, the atmosphere is suitably creepy, drenched in fog and abandoned dilapidated buildings. It loans itself more to ‘Silent Hill’ than ‘Paranormal Activity’, the previous credit of writer Oren Peli.

While some moments are unoriginal and the dialogue is laboured, Diaries really nails atmosphere and suspense and, ultimately, never fully explains the situation, this may frustrate some viewers but, in our view, the moment a trick is explained is the moment it loses its effect. So, Chernobyl Diaries did, in our minds, exactly what it said on the tin, moments of mild gore and shock and a slight tongue-in-cheek attitude to the horror. We expected it to be worse but that certainly doesn’t put it atop the horror greats; a one-watch movie with a forgettable cast which, despite its inclination shouldn’t require a sequel. Hopefully Peli will have learned this from Paranormal Activity, but as a fourth instalment of that franchise is in production set for the foreseeable future, we may not be too lucky.

Thank you to Cineworld for allowing us to cover the film, and their continued support.