After making top quality films like The Devil Wears Prada (2006) and Marley and Me (2008), director David Krankel really dropped the ball on his newest release Collateral Beauty (2016). 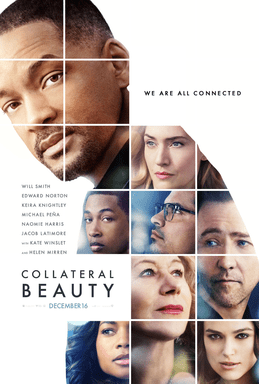 Maybe that is unfair to say, the overall look of the film displays New York City at it’s most enchanting and twinkly, but it just doesn’t fit within the concept of a bereavement film. Don’t get me wrong it’s a cute enough film, but it would suit more to an afternoon slot on Channel 5 than the big screen. The biggest problem here is with the script. Krankel has done his best to create the atmosphere and the beautiful high-angle shots of New York are incredible, if only the script was too.

The performances from Will Smith, Helen Mirren and the rest of the cast are all good, however there is always something missing after each one of Will Smith’s ‘passionate’ speeches to ‘death’, ‘love’ and ‘time’. The film just doesn’t take advantage of his usual trademark charm and as much as he tries, he is unable to reach the kind of sentimental response he managed to achieve in The Pursuit of Happiness (2006). Krankel really tries hard to reach those deep emotional spots, but each time falls short at the last hurdle and even the hugely successful cast can’t save it.

The film is at it’s most enjoyable, when introducing the three actors, Kate Winslet, Edward Norton and Michael Peña hired to become ‘death’, ‘love’ and ‘time’ in order to antagonise some sort of grieving response from Howard (Will Smith). However the best and most believable performance comes from, Naomie Harris, a bereavement councilor that Howard goes to see. She is the only character not willing to indulge in Howard’s deep self-pity and instead encourages him to move on and come to terms with death of his daughter, these are the only realistic scenes in the film, but even they are ruined with the absolutely ridiculous, unnecessary twist provided at the end of the film.

Released in the same month as Manchester By The Sea (2016) and A Monster Calls (2016), Collateral Beauty just can’t compete and in comparison supplies a poor depiction of grief to those who have not experienced it.