Film Review: ‘Dawn Of The Planet Of The Apes’ [City Screen, York]

Since the planet of the apes apparently rose in the first iteration of the reboot of this famous franchise, it seems that the apes have apparently backtracked a little and opted to return to dawning. With the director of ‘Rise’ Rupert Wyatt deciding not to return, the responsibility for this ape-laden sequel lies with Matt Reeves with his first feature film since 2010’s horror reboot ‘Let Me In’. His filmography also boasts the disappointing monster movie ‘Cloverfield’, so one would hope that he’s upped his game having decided to return. 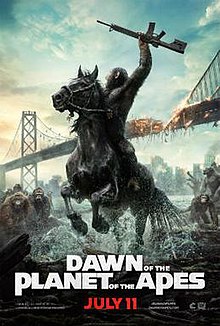 And he has indeed. The good thing about ‘Dawn’ is that it succeeds in taking the first film, a competent but not spectacular effort, and adding a heck of a lot more emotional depth, together with quandaries that border on the philosophical and rip-roaring action sequences that provide a lot of entertainment in to the bargain. It’s directed with an eye for detail by Reeves, who focuses on spectacle as well as detail, always reminding us of the fright felt by both humans and apes at their opposite numbers, and the tensions that seem like they can only result in conflict.

It is, however, still susceptible to a few criticisms. The apes are fantastically drawn in this film, and a brilliant step up from the last one where all we really saw of them was Caesar himself, and their interactions, first through sign language and then often in the English language, convey their hopes and their trepidations about the humans brilliantly, the conflicting views and opinions becoming clearly known, the CGI and the voice acting, anchored by the motion capture master Ander Serkis, is brilliant and you’re swept up in the apes’ world from the very beginning.

…And then the focus shifts to the humans. While the performances put in by the likes of Jason Clarke, the legendary Gary Oldman, Keri Russell and Kobi Smit-Phee are all competent and their attempts to make their characters feel real are largely successful it always feels like they’re not quite as interesting as the apes, and that’s not just the computer imagery talking. There seems to be more depth among the ape community, whereas lots of the humans are simply condensed in to screaming masses shouted at to calm down by Oldman’s leader character. This could have become more of a problem had the interactions between apes and humans been more disjointed, but it isn’t. Indeed, those interactions make for some of the most tense and exhilarating moments of the film, different apes and different humans having an opinion on how they should go, and hold different grudges and think up their own justifications for their behaviour. It’s in these moments that the depressing reality of the human condition is revealed, and the film must really be congratulated for managing to become so visceral in its examination of the nature of fear and its relationship with war.

‘Dawn’ may be a little uneven at times but it’s a film that knows what it wants to achieve, and its ambition does not go unrewarded. It becomes an experience that’s more than just the unassuming drama of ‘Rise’ but a much harder hitting feature that refuses to let go once it’s grasped hold of you, gluing your eyes to the screen for the entirety of its 131 minute runtime. It can definitely be said that we’re looking forward to ‘Noon of the Planet of the Apes’ and the nice, homely ‘Teatime on the Planet of the Apes’ follow-up because as it stands, the film does more than enough to negate the negative effect of its excessively mouthy title.