Another review coming from our trips over to the Cineworld in Hull! Sweet. Ignoring the monumental failure that was the 1995 Sylvester Stallone vehicle ‘Judge Dredd’, which featured, above all lamentable things, Rob Schneider and a ton of cheesy one liners for example: “I never broke the law, I Am The Law!”. The dreadful ‘Judge Dredd’ is, in our minds, way overdue for a revamp and what a revamp we get. 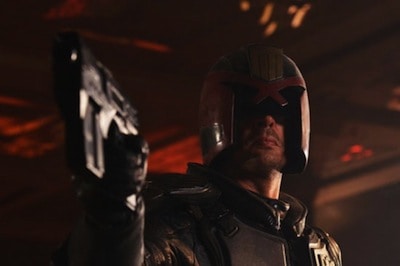 ‘Dredd’ in 3D whittles down the scale dramatically and concentrates, very much like ‘The Raid’ from 2011, on two characters trapped in a block of flats. This may sound boring seeing as Judge Dredd took us all the way through Mega-City One and out into the Cursed Earth but this seems to be Dredd’s saving grace. There’s no time in this film to get bored as the action is slick, sick and plentiful; blood spurts at an alarming rate, limbs are strune about from numerous gunfire and explosions, also the physical and psychological torture is long and heavy. If this all sounds too grotesque…it is, and in lovely Real D aswell.

The crux of the matter is (although we’re loathed to keep comparing Stallone’s abomination) ‘Judge Dredd’ 1995 actually stuck closer to the original 2000 AD comics, of which we at Soundsphere are avid fans, than the reboot; yet despite the numerous subtle references, Dredd is better for the departure as the gaudy costumes and ridiculous makeup made Judge Dredd look like a pantomime. The 2000 AD comics have had a vast and loyal following since 1977 and Judge Joe Dredd was it’s most beloved character, the comics also had a very tongue in cheek cartoony style (akin to Stallone’s own visage) but also expertly balanced a lot of gore and violence in a way only a comic can. This, when translated in the mid nineties, made Judge Dredd look like a disgusting chimera of a ‘Power Ranger’ style children’s movie and a ‘RoboCop’ type adult film. It just didn’t work. Dredd 3D sacrifices all of this and boils everything down to a short, gritty, bleak vision of the 2000 AD future. Like the comic Dredd never removes his helmet (a move it’s predecessor should have enforced), his lines are few and far between and, in our minds, Karl Urban really nailed the character. Even if he does look like he’s going to cry from time to time. Urban is definitely channelling Clint Eastwood here but it works so well.

The rest of the cast are also pretty good, fellow Northerner (from ’round Huddersfield) Lena Headey is fantastic (and disturbingly sexy) as the gruesomely psychotic Ma-Ma, Wood Harris (from HBO’s The Wire) puts on a pretty creepy show, and even Olivia Thirlby gains more for Anderson’s character as the film progresses. Performance, however, is not why one would go to see ‘Dredd’ 3D, we go for the action, the style and, most notable of all things, the Slo-Mo drug effects which are spellbinding especially in 3D. Pete Travis has utilised his relatively small budget incredibly well juggling some subtle CGI effects with practical action and taking the basic concept of slow motion photography to an awesomely imaginative level, this definitely must be seen to be believed. Dredd 3D was filmed in Cape Town, South Africa and with a cast of mostly Brits and unknowns, so Travis was able to work on the style and look of the movie and avoid the Hollywood egos.

So what did we think? We absolutely loved it! It’s brash, loud, overwhelming in it’s MTV style, but for a dumb action movie it’s surprisingly smart and very, very cool. Walks all over Sly’s mega fail; could Urban be the new action hero? Let’s hope so.