Neill Blomkamp really hit the big time with debut film ‘District 9’ and since that unmitigated success people were intrigued to see what he would come up with next, and so were we. ‘Elysium’ is a sort of cousin of the first in that it is another film about social strife and the question of equality, but from the opposite perspective to the former film. Unlike ‘District 9’ he has a star-studded cast to work with and brings ‘District 9’ lead Sharlto Copley along with him who actually remains one of the best with his performance as the twisted agent Kruger. Matt Damon meanwhile gives a competent performance here as a fairly generic lead who possesses a lot of charisma but many of the stock characteristics of an action hero. His character is ridiculously muscly considering his poor background and looks far too well-groomed to be believable, but Damon overcomes this and it becomes an interesting study of his past and his ambitions for the future, despite its distinct sense of over-the-top Hollywoody-ness that probably was inevitable with Blomkamp’s rise to fame. 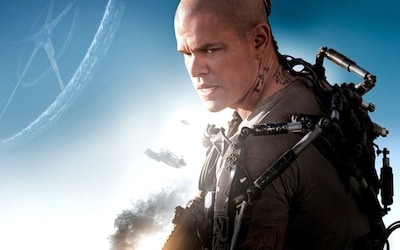 Blomkamp is fairly heavy-handed with his narrative devices but the general concept and Damon’s acting carries the film through a very ordinary first act and onwards to a more interesting tale that is a level above the average action film, despite its attraction to large explosions and lengthy fight scenes. While this mixture of action and plot works, it’s disappointing that Blomkamp doesn’t delve in to the situation he has created more deeply, with the intriguing futuristic world being confined to the edges of a pretty simple plotline that seems entirely detached.

Some of the acting performances leave a little to be desired as well. Jodie Foster gives a very strange, dead performance as one of the high-ranking Elysium politicians that smacks of half-hearted money grabbing and makes any time spent with her on screen annoying and only ever made interesting with Copley’s Kruger involved, who is a very good screen presence and is always very fun to watch. Alice Braga’s Frey isn’t badly portrayed, but it gives rise to a largely uninteresting romantic subplot with Matt Damon’s character that sucks more energy out of the vibrant setup.

‘Elysium’ does succumb to cliched plot devices and sections that last far too long, its salvation is in the performances of Damon and Copley and in the well-directed action sequences and suspenseful journey that elevate it to a good quality action movie. Blomkamp could certainly have made more of it, but what he has made is a slick and carefully constructed film that looks great and has ideas that are edgy, even if they aren’t executed in as thoughtful a way as they may have been. The film is still definitely worth a watch despite  its flaws, and represents a degree of evolution for Blomkamp, who still has a promising career ahead of him. Its unevenness is definitely a shame, but not enough of one to detract from an experience that is ultimately an enjoyable way to spend a couple of hours, even without the intellectual stimulation you may have expected.