Here at last finally arrives the long, long-awaited reboot to the original Evil Dead trilogy, which finished with Army of Darkness in 1992. Rather than a direct continuation of the Bruce Campbell story, we have a new protagonist retreading familiar footsteps and a new director in Venezuelan born Fede Alverez. As a first time Hollywood director this is an obviously risky move for the re-boot of a franchise with a very strong cult fanbase, however it is definitely in keeping with the grassroots, amateur spirit of the original trilogy and proves to be a very wise decision. 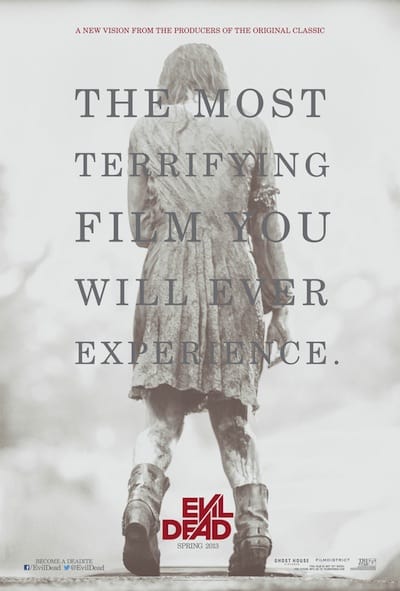 The story here is essentially a remake of films one and two, so confusingly a re-imagining of a re-imagining. The cult fans among you will know that Evil Dead 1 and 2 essentially followed the same storyline of teens trapped in a cabin in the woods, but with the second being a reimagining of the original: adding more emphasis on comedic elements and the signature weapon of the Evil Dead franchise, the chainsaw attached to the amputated arm stump. This film is truer to the style of the original Evil Dead, but borrows some elements which were introduced in the second film.

Although the setting of American teens trapped in the woods seems more like horror parody in modern cinema, this concept was actually quite groundbreaking on the release of the original Evil Dead, and we are really glad that Alvarez and Raimi didn’t try to update this location for a measure of originality. Since Raimi practically invented the cliche, surely it doesn’t apply to his works?

The film is fairly short at around 90 minutes, however this really helps the pacing as at no point does the film drag or relent on the horror, instead starting slow to build initial tension and then steadily ramping up the horror and blood until the very brutal finale. What is very impressive here is the use of traditional horror elements, particularly “shock” tactics in clever and interesting ways which will make you jump and squirm in your seat.

While certainly being brutal, at no point does this film cross into “torture porn” territory like the Hostel and Saw franchises, with the violence always feeling contextually appropriate and well-balanced. Comedic elements are now mostly non-existant apart from one or two well-placed jokes and some over the top gore which will either make you laugh or shock you, depending on your sensitivities. While initially the lack of comedic elements may come as a disappointment, it was necessary to help set the tone of the film. This really is a production that sets out to try and scare a modern day audience in the same way the original did in the early 1980s and though it could never conceivably have the same impact as the original, keeping the comedic elements from the 1987 sequel would have diluted the horror.

For the cult fans out there are some running gags which will be instantly recognised. Among them is included an updated version of the Evil Dead’s most infamous and controversial scene (no spoilers), which is almost completely changed and rather tame in this revamp compared to the original.

As long-term Evil Dead fans, we absolutely loved this film to bits. Everything here works, as an appreciation of the originals and yet with enough originality and style to find its own unique place in the canon. The focus on horror was definitely a wise decision, as was the choice of protagonist which is a fantastic twist that you will not see coming. Our only real gripe is with the final demon in the film, which seems somewhat rushed and slightly limp. For a creature from hell, all it seems to do is stagger around. Where are the demonic powers?

This is the perfect way to restart the Evil Dead series, and hopefully future installments can live up to the standard that this one has presents. With a horror dream team of Raimi, Campbell and new kid Alvarez though, how can they fail?