We’ve moaned, we’ve groaned and all of us complained about Tim Burton and his recent lack of originality, the slow decline beginning in 1999 with stylishly composed ‘Sleepy Hollow’ and the incredulously appalling ‘Planet Of The Apes’ remake (of which we shall disown all memory) through to ‘Charlie And The Chocolate Factory’ and ‘Alice In Wonderland’, both of which accrued public slatings. 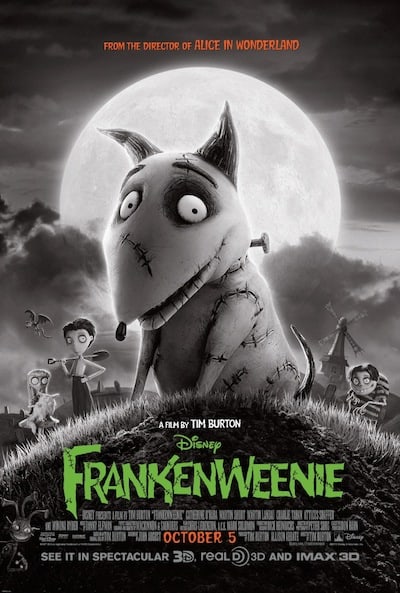 Firstly, we must add that as fans of Burton we, at Soundsphere, are lovers not haters and, in fact, appreciate and quite enjoyed both ‘Charlie…’ and ‘Alice…’ as palatable re-imaginings, moreover the issue we’d like to raise is his recent successes, chiefly the fantastic ‘Corpse Bride’, the often audience dividing yet outstanding ‘Sweeney Todd’, his most personal piece ‘Big Fish’ and ultimately ‘Frankenweenie’ and this is where we begin our darkened gothy Halloweeny review.

To begin ‘Frankenweenie’ appears to have divided audiences once again some accusing it of being boring, looking dull in black and white and too excluding with its B-Movie references but we can’t see why, if anything that’s not only the film’s charm, it’s also its point! ‘Frankenweenie’ is a sweet heartfelt movie about life in school, science gone wrong and a boy who misses his dog…the reanimating animals from the dead part is merely a means to an end. Granted, one that goes horribly, horribly wrong.

The movie also is a fantastic resource for movie nerds like ourselves, the references are abundant, to wit: the kids who resemble Frankenstein’s Monster and Igor, the neighbours’ Bride of Frankenweenie dog, as well as the Science Teacher, Mr. Rzykruski is clearly based on classic horror star and Edward Scissorhand’s creator Vincent Price. Burton, it seems, has referenced his own films quite heavily here as Mr. Rzykruski is voiced by Martin Landau, who won an academy award in 1994 for his portrayal of horror star Bela Lugosi in Burton’s brilliant ode ‘Ed Wood’, Winona Ryder voices Elsa Van Helsing (which made us grin), Martin short, Catherine O’Hara and Conchata Ferrell are all old hats with Burton movies who have been brought in as vocal talents. The next door neighbour Mr. Burgermeister heavily resembles Finis Everglot from ‘Corpse Bride’ in the same vein that Bob is the spitting image of Augustus Gloop and the Were-Rat is the same design of his same creation from ‘Nightmare Before Christmas’, even the ending sequence brings back images of Joe Dante’s ‘Gremlins’, and then there’s the Christopher Lee film footage. Essentially the movie is one big homage to golden-age horror and golden-age Burton, it seems obvious that he’s strayed away too far from his own style of late and (as proven with ‘Sweeney Todd’) when Burton rejects the effects and gimmicks and boils everything down to a character piece with real heart he can produce a masterpiece and above all it’s really, really funny!

On the con side it has to be said that the movie begins a little slow, possibly testing the patience of its younger audience as well as alienating anyone who isn’t as au fait with the catalogue of antique horror as we are, yet these points aside its style is brilliant, its animation is absolutely incredible and its humour is spot on as well as its heart. Is it as good as ‘Nightmare…’? No. Does it parallel it’s current rival ‘Paranorman’? Difficult to say as they are so different. Is it entertaining and classic 80’s Tim Burton? Most definitely! And we quite frankly wouldn’t want it any other way.