As far as 3D cinema goes, there are rarely any moments when it seems in any way worthwhile. Since ‘Avatar”s technical achievement, even the best 3D experience comes below the 2D experience, perhaps with the exception of anything shown in IMAX. Retrofitting has always been a disappointing experience and the glasses serve as an annoyance that you find yourself thinking you easily didn’t need, so could anything get 3D out of the downward spiral of doom that it’s in? ‘Gravity’ doesn’t quite provide the full solution so much as show you that the medium does have its benefits despite all the criticisms of it being overly gimmicky. 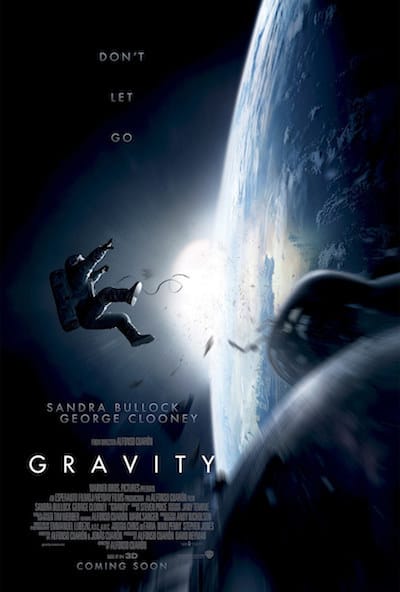 Director Alfonso Cuaron, primarily of Harry Potter fame having directed arguably the best of the films in the shape of ‘The Prisoner of Azkaban’, certainly doesn’t let up on the spectacle front, providing you with the sort of experience you would expect of a NASA documentary at your local IMAX cinema. There are various jaw-dropping panorama shots and the opening is downright mouthwatering, and this is even before we’ve even got to the first line of dialogue. Cuaron and cinematographer Emmanuel Lubezki do a great job of giving you an idea of the expansive surroundings before panning in to our main characters, giving an idea of the sheer scale and scope of the environment, and giving the film that nervous edge from the very beginning.

Cuaron’s dialogue itself is snappy and amusing, making the most of George Clooney’s humorous side and allowing for an early rapport to build between him and lead Sandra Bullock, who puts in one of her best performances in years. The dialogue does, however, also have its cheesy side, building in a lot of space film clichés that you can almost tick off a checklist, but it does work in the film’s context. Bullock and Clooney do enough work to make it all believable and heartwarming, and their interplay is further strengthened by the way they deal with the script.

While all this is going on, the film never stops dazzling you. The sheer scale of everything is enrapturing and awe-inspiring, and everything has a huge feel to it that means your eyes are glued to the screen for the entirety of the film’s bravely modest 90-minute running time. Indeed, this stripped-back approach means that Cuaron can focus simply on the situation he’s created, focussing on a very small number of characters, without worrying about getting past the two-hour mark, which means that all the tension, all the swirling madness of the landscape and all the downright majesty of it is maintained up until the last triumphant second.

Some have called ‘Gravity’ the cinematic equivalent to an especially thrilling fairground ride, and this is a comparison that I would be inclined to agree with, except with the added caveat that it’s like a fairground ride so memorable and exciting that it will stay with you for a long time. The only criticisms that can be thrown at it are to do with a script that does not shy away from its influences, and maybe doesn’t breach any new or particularly deep ground, but in the context of this film that matters almost nothing. Bullock’s performance will challenge at the Academy Awards and masterful direction by Cuaron means that he may also get a nod along with, most probably, the film itself. One thing is for sure, the film is destined to have a legacy, and it deserves to have one that recognises that it definitely is an extraordinary piece of filmmaking, showing just what can be done in modern film, and just how to do it really well. If 3D was this good every time, it would be a whole different ball game.