For a couple decades now, Joel and Ethan Coen’s films have been something of a mixed bag for fans. The brothers are often mentioned among the deepest and best directors in Hollywood, but there’s an argument to be made that they’re still coasting by in part on the success of back-to-back ’90s hits ‘Fargo’ and ‘The Big Lebowski.’ So far this millennium, the Coen brothers’ work has offered a pretty volatile up-and-down swing marked by highs including ‘No Country For Old Men’ and ‘True Grit’ and lows by the name of ‘Intolerable Cruelty’ and ‘The Ladykillers,’ and I might argue ‘Burn After Reading’ (though the reviews weren’t unkind). 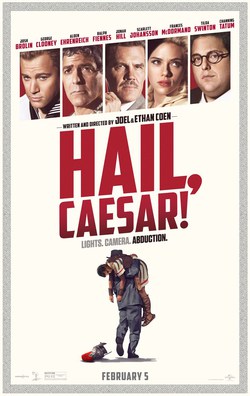 ‘Hail, Caesar!’ falls somewhere in the middle, undoubtedly one of the more joyous films the brothers have produced in some time (and thus among the funniest), but undeniably lacking in cohesion or, some might say, point. It’s effectively a day in the life of Eddie Mannix (Josh Brolin), a fictional production head in Golden Age Hollywood, as all hell breaks loose regarding several prominent projects, actors, and directors.

The acting here is a lot of fun to watch, and the Coen brothers and their stars deserve credit for reaching for (and hitting) such a particular tone. Basically, it’s over-acted in the most deliberate manner, especially when it comes to Brolin, George Clooney, and Ralph Fiennes. It heightens a sense of what one review termed the Coen brothers’ “most PG Wodehouse mode” and inevitably results in consistent chuckles. But the style of acting at play isn’t merely amusing. It also helps generate an atmosphere that’s flawlessly suited to how many film fans have come to view the so-called Golden Age in Hollywood, whether fairly or unfairly.

This is a very curious age, because it can appropriately be divided into two distinctly different halves. The first is that of the massive, sprawling historical epic, something Hollywood embraced in the ’50s that’s found new life in the 21st century. Every year it seems we get another of these sorts of films, beginning with 2000’s ‘Gladiator.’ That particular film, despite being the great grandfather of the campy Roman epics mocked in ‘Hail, Caesar!’ was so well received that it won the Oscar for Best Picture. And its popularity lives on today, as still stands as one of the remarkable titles in this century’s canon. Sixteen years later, this site features a casino game based on the film, and the musical themes and images therein are easily recognized even by younger fans. Russell Crowe and Co. are used as slot wheel results, when one might expect a more recent film would be a bigger draw. In short, modern versions of the very genres mocked by ‘Hail, Caesar!’ are among our most popular movies, and I’ll leave you to riddle out just what the Coen brothers mean by reminding us of the genres’ goofy origins.

The other half of Golden Age cinema, at least as it’s depicted here, is similarly over-the-top without the immortal appeal of period epics. That’s not to say every film made during the period was ridiculous, because we probably wouldn’t refer to it as a Golden Age in that case. However, some of what stands out all these years later does tend to look silly, if in some cases merely because it’s dated material. And that’s another area in which the Coen brothers have excelled here merely through the creation of an atmosphere. There’s a very real sense at times that what’s being done on set feels important and sophisticated while we as viewers see it as something less. It’s almost like watching actors act without any embellishment, editing, or context.

Unfortunately, it’s a bit of a glorious mess when you get beyond appreciating the acting and atmospheric take. We don’t tend to go see Coen brothers projects in search of airtight narratives or reliable structure, but ‘Hail, Caesar!’ feels almost unnecessarily scattered. This keeps it from landing a place among the brothers’ best films, and may be one reason that this report cited the film as their biggest box office bomb since 2003 (and the aforementioned ‘Intolerable Cruelty’).

In the end, it’s really kind of a shame, because you can feel that a better project exists beneath the surface. ‘Hail, Caesar!’ has a lot going for it and is certainly worth a watch, but it frustrates and delights in equal measure.