Expectations for this fantasy take on the Mary Shelley classic were generally very low. Though it features respected thespians like Aaron Eckhart, Miranda Otto and the always entertaining Bill Nighy it contrives to waste them all in a mire of rubbish dialogue and bad costumes. 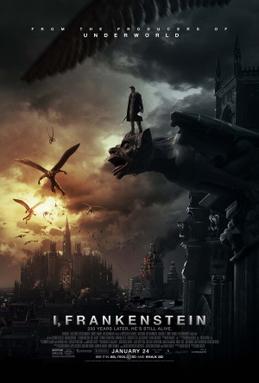 Comparisons to Timur Bekmambetov’s abomination ‘Abraham Lincoln: Vampire Killer’ are inevitable. While ‘I, Frankenstein’ is based on a graphic novel and ‘Vampire Killer’ is a  Seth Grahame-Smith mashup, they both suffer from horrible over stylisation and take themselves far too seriously to capitalise on any possible comedic tone that could be utilised. Aaron Eckhart, so often a reliable source of entertainment even if the film he’s  in is nothing more than average, here has been dumbed down to such an extent that it looks like he’s not putting in any effort at all. Growling his lines like a cat choking on a hairball and struggling to make rubbish dialogue (It’s hard to connect to a character that spends most of his time running and regurgitating such ridiculous things as “I am the terror that flaps in the night”) sound epic without drawing attention to his glorious Hollywood haircut and wonderfully built abs, which are ridiculous in the context of the character. Perhaps the DVD will have deleted scenes where he visits a neighbourhood gym and casually rounds off fifty bench press reps before randomly punching the rowing machine and gelling his hair in front a mirror.

Far from accepting its position as a schlocky and ridiculous action film which may have won it some reprieve, writer/director Stuart Beattie decides to pack every other minute with exposition that neither sticks with you nor makes any sense while you’re listening to it. Miranda Otto rather grandly talks about the ‘Gargoyle’ or angel order from time to time, but all you hear are random mystical sounding phrases that have either been thrust upon you at that moment or you are supposed to have learned the collected history of already which assumes that you have been following what the characters have been muttering at each other at all. If you have a normal attention span you haven’t and have rather been considering dinner options and the merits of spaghetti over rice, a much more interesting pursuit than learning how the Flingots of Pharanxar have decimated the Parakeets of Ninjaville or whatever it is that they’re so concerned about.

While it fails on every level in this respect, ‘I, Frankenstein’ at least manages to make use of its murky aesthetic to provide us with some mildly enjoyable action sequences that manage to keep your attention for as long as stuff is consistently happening on screen that has nothing whatsoever to do with the plot. This is however basically the only aspect of the film that works to any degree, as the chemistry between Eckhart and Yvonne Strahovski, here playing a scientist named Terra, is non-existent and every conversation they have is bland and often pointless. This is the fault of neither actor and once again points the finger at the main problem with this car crash of a film: the script. Stuart Beattie, we must conclude, decided to take the worst elements of every film that was even vaguely ‘Van Helsing’-esque and conspire to make an amalgamation of unintentionally amusing and plain groan-worthy phrases that he then decided not to reread because he must consider himself a genius. On this evidence, he’s more Peter Andre than Peter Higgs, and a screenwriting class would not go amiss. ‘I, Frankenstein’ is ultimately as memorable as a stick of celery, and much less nutritious. Go eat one of those instead, it’ll be more fulfilling.