You’ve probably seen the posters with no title on them. You’ve possibly heard the bleeped-out radio spots. You’ve definitely seen the censored TV ads. All of this adds up to one thing… 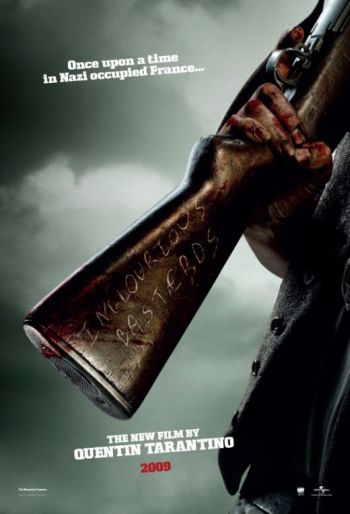 Quentin Tarantino has a new movie out, and everything about it screams “controversy” – so, where to start with this review? Do we point out that this über-violent take on the WWII exploitation revenge fantasy from Hollywood’s favourite enfant terrible took ten years to write and is likely to have a sequel? Do we point out that it gleefully mangles history like some caffeine-crazed boy’s own adventure on steroids? Do we grumble and groan about the fact that the soundtrack – crammed full of Tarantino’s beloved Ennio Morricone and featuring a stomping number from David Bowie – is the most incongruous and inappropriate you’ll hear all year?

No, because doing that would be the obvious way of going, and that would be unfair on what is actually – once you strip away the hype – a pretty good movie. View this the way it was intended – with your brain switched off to realism and switched on to Tarantino’s unique way of looking at the world – and this becomes the paean to the 1970s exploitation genre that his previous Kill Bill wishes it was.

The comparison to his last “roaring rampage of revenge” doesn’t stop there, though. Clocking in at a hefty one-hundred and fifty-three minutes, this is on the surface the bloodthirsty tale of a group of Jewish soldiers (the titular “Basterds”, whose mis-spelled moniker is one of several plot-points never fully or satisfactorily explained) led by Brad Pitt’s Lieutenant Aldo Raine – to describe his performance as marvelously hammy would be an understatement, so instead imagine the bastard offspring of Errol Flynn and George W Bush and you’ll be halfway there – who hunt down and exact graphic revenge on Nazis. Scratch a little deeper, and Tarantino’s familiar labyrinthian plotting comes spewing forth – not only are the Basterds hunting Nazis but so is Shosanna, the sole survivor of the chilling farmhouse massacre that starts the movie. Shosanna’s tormentor is himself back in town for the premiere of ‘Pride Of A Nation‘, a movie-within-a-movie featuring top Nazi sharpshooter Frederick Zoller, who himself has a romantic interest in Shosanna without realising that all she wants to do is put each and every last Nazi she meets in an early grave. That’s even before we get to Diane Kruger’s double agent, or Mike Myers’ blink-and-you’ll-miss-him British general, or…

Basically, as I said earlier, there are enough plot threads left dangling to launch a flotilla of prequels – why are they called the “Basterds”, why does Pitt’s character have a huge unexplained scar around his throat, what happens between 1941 and 1944 to enable Shosanna to go from terrified ingénue to hardened freedom-fighter, what actually happens to Zoller in the terrible battle we see him acting out? On the one hand this is good because it will hopefully plaster over some of the cracks in the plot, on the other it’s bad because it probably means more tearing up the history books.

However, that last comment is possibly unkind – after all, the movie itself begins with the words “Once upon a time… in Occupied France”, so perhaps we should just settle back and enjoy this modern-day fairytale – its treatment of reality is certainly no worse than that of, say, such movies as ‘U-571‘ or ‘Saving Private Ryan‘.

Likewise, the script is definitely worth a second or third listen – although it’s obviously less quotable than ‘Pulp Fiction‘ or ‘Reservoir Dogs‘ but that’s possibly only because Tarantino has taken the admirable step of writing the main part of the movie in languages not his own.

The acting may be silly in places – the audience I was part of could not stop sniggering – but it is made up for in other places, such as the aforementioned opening atrocity, or the three-way standoff which precipitates the final apocalyptic bloodbath in the movie theatre. Technically the film is without reproach – each shot framed lovingly, almost voyeuristically – and each gunshot explodes like a world about to end as it splatters across the screen. Perhaps that’s what Tarantino is saying with this movie – that yes, war is Hell… but if you’re going to turn it into little more than an ultra-gory cartoon then why not turn it into one with heroes you can cheer, villains you can boo and an ending that makes you want to punch the air with glee?

Myself? Don’t ask me, I just work here.