Having picked up the accolade of being the only man in Hollywood who had the ability to show us that Adam Sandler is actually a worthwhile actor, Paul Thomas Anderson has since been renowned for making iconic films like ‘There Will Be Blood’, and is renowned for giving his actors the space and the quality scripts required for them to shine, Daniel Day-Lewis being a prime example of a great actor allowed the room to produce something extraordinary. Anderson has always made intelligent and thought-provoking films and has built up a loyal fanbase, who have eagerly been anticipating this adaptation of Thomas Pynchon’s famously incoherent novel. 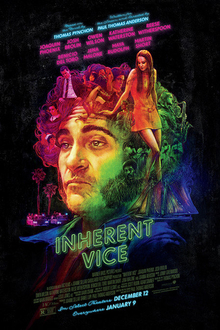 The first thing Anderson does is capture the atmosphere of the setting. ‘Inherent Vice’ finds us in 1970 following the exploits of ‘Doc’ Sportello, a private investigator and dope head as played brilliantly by Joaquin Phoenix, who finds himself caught up in a snowballing case that spirals out of control with no end in sight. As such, the film’s grimy palette and lazy vibe puts you right in the stoner frame of mind required to take the film in, eccentricities and all. This is no small part down to Phoenix who really excels as Sportello, turning him in to a good-natured but often spaced out protagonist who is good at his job and would probably be better if he could just put down the drugs for a long enough period of time.

The interplay between Phoenix and Josh Brolin’s great turn as Detective “Bigfoot” Bjornsen make most of the strongest parts of the film, amusing and strange as they are. The characters play off each other brilliantly, with motives always a little hazy, much like the rest of the film. The haze we’re under gives every character an enigmatic edge, like we’re waiting for a secret side to them we didn’t know was there, bogged down as we are in the powerful aura of a film that looks bedraggled but is put together with the utmost care to extract every ounce of entrancing power it may have.

Baffling and flawed and definitely not Paul Thomas Anderson’s best, ‘Inherent Vice’ relies heavily on its atmosphere and the symbiotic relationship that it has with Joaquin Phoenix’s performance, which both feeds off it and gives it back as he mutters and stumbles through the mystery. It may not be one of Anderson’s most thought-provoking features, and films like ‘Magnolia’ and the aforementioned ‘There Will Be Blood’ definitely have more power, but what Anderson has managed here is an exercise in the power of creating an atmosphere that grabs you and implores you to swim along with it, caught up in its irresistible almost viscous current. ‘Inherent Vice’ isn’t a film that grabs you in a normal way, and if you expect that you probably won’t get much out of it since the story is often baffling and its humour is of a very particular kind, but it definitely sweeps you along in the tide. You just have to be ready to let it.