When the Academy announced its nominations for the best picture award at this year’s ceremony, the Coen brothers’ latest effort was conspicuous by its absence. As a creative team the film making duo have been well liked by the awards season in the past, with ‘True Grit’ picking up ten nominations back in 2011, but this time the cold snub must either be down to the general opinion that this film is not as good as their other ones or that there are some genuinely fantastic films in the roster that just cannot be replaced. It must be the latter because this latest Coen brainchild is another masterpiece to add to the growing list. 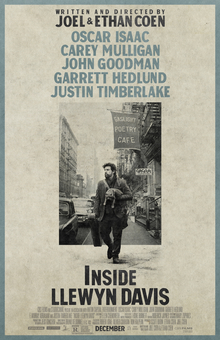 The film is bolstered by a wonderful performance by lead Oscar Isaac, whose profound, bitterly comic turn introduces us to Llewyn Davis gently but ensures we understand all aspects of Llewyn’s personality, all of his misplaced arrogance and even his continued sense of compassion, even for random cats. His facial expressions and tone are the source of much of the film’s emotion, from his deeply moving song delivery to his needlessly irate tone when addressing people who have gone out on a limb for him, Llewyn is by no means a perfect person, and over the course of the film that is just what endears you to him more. Together with the fact that he performs all of his live music sections himself brilliantly, Isaac probably deserved an Oscar nomination for his performance, but it bodes well for future efforts that he’s so strong here. Other strong performances come from the likes of Carey Mulligan, performing at her best as a none too sympathetic ear for Llewyn to both vent at and be vented at about his various failings and general lack of foresight as to where his life is going, and John Goodman, who puts in an amusing performance as a stuck-up jazz musician who tramples on Llewyn’s nerves to breaking point with many astute (in his eyes at least) and insensitive observations.

What makes the film such a wonderful experience is not just the acting performances however, but the wonderful way it manages to balance sentimentality, humour and melancholia perfectly, with even the way the film is shot, expertly done by Bruno Delbonnel, invoking the 60s feel and the distinct almost desolate and hopeless tone of the film through the dark, grimy colour palette. The Coens create an atmosphere of unfulfillment that makes every scene a little more emotionally dense than it would otherwise have been.

Even though it troubles itself with no other perspective than Llewyn’s and he cuts a pretty lonely figure throughout, it never once feels like it’s a cold film despite its almost damning exteriors, and the way Llewyn deals with failure and trundles on doing what he loves makes the almost mundane seem a lot more interesting when it’s full of the deeply personal drama that this is, expertly mixed in with melancholic humour that never fails to hit the mark. It’s almost certain to be high on my end of year list in eleven months’ time, and is another wonderful example of the Coens as expert auteurs, blending many aspects together to make a film that doesn’t relent and tells the story of a less well known time before folk powerhouses like Bob Dylan brought the scene back in to the mainstream. “If it was never new, and it never gets old, then it’s a folk song” smiles Llewyn during a particularly heartfelt performance to the enjoyment of his small crowd, and that almost completely encapsulates the film too. It’s timeless and, much like the great folk songs, will only get better.

See what times the film is showing here