Film Review: ‘Inside Out’

Home » Film Review: ‘Inside Out’

Pixar have always been known as a highly innovative studio and one of the pioneers of high quality mainstream animated movies, but some have accused them of not being able to maintain their previously impeccable standards recently. Films like ‘Cars 2’ and ‘Monsters University’ have met with a decidedly mixed reaction and while ‘Brave’ was a modest success at the box office and also received critical praise, it was again seen as lacking that original streak that differentiates Pixar animation from the rest. 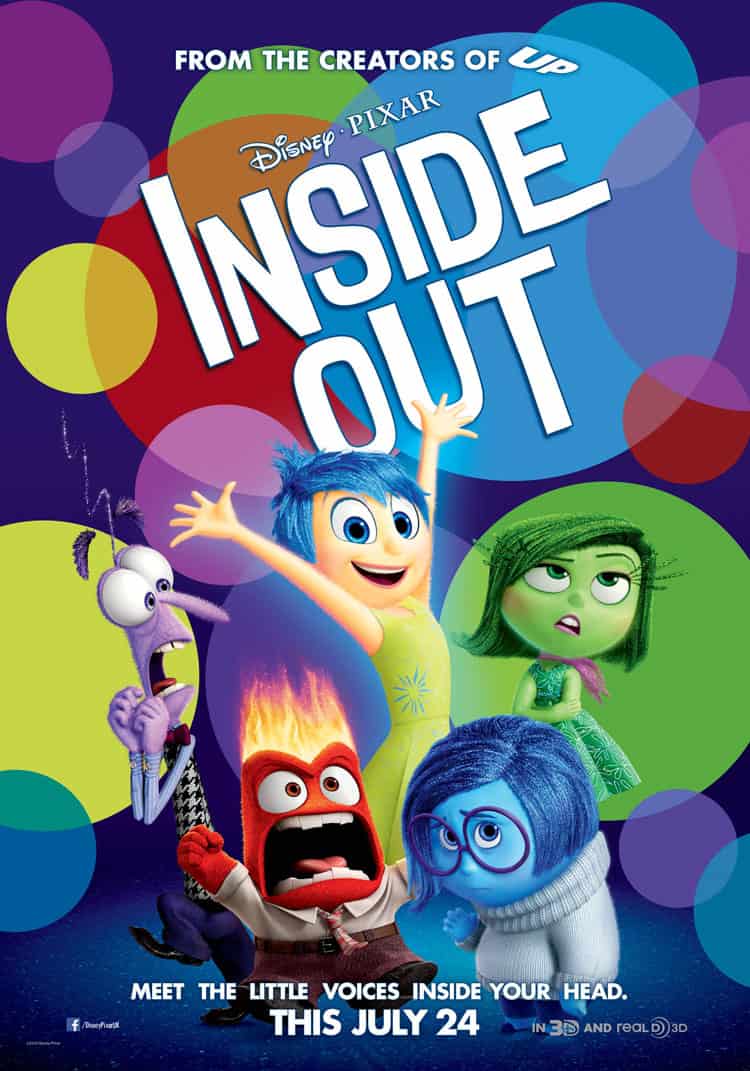 The best way to deal with murmurings of doubt is by showing everyone that the studio hasn’t lost its mojo at all, and ‘Inside Out’ does just that. Director Pete Docter has a very strong history with the studio, working as animator and writer on many of their marquee projects and helming ‘Monsters Inc.’ and ‘Up’, two of their most original and intelligent works. He continues to show himself to be a visionary director here, with a film as touching and confident as any of Pixar’s best, its clarity of ideas and wonderfully thought out plot devices making for one of those hugely rewarding cinematic experiences that they are so well known for.

The film centres around the idea that when a child is born, in this case a girl named Riley, her emotions are manifested in five forms: Joy, Sadness, Fear, Anger and Disgust. These manifestations work from a control room inside her mind and control her conscious feelings, actions and memories. As an eleven year old, her distinctly happy life is thrown in to turmoil when her family moves from her hometown in Minnesota to San Francisco, sending her emotions in to overload. It’s definitely an intriguing premise and one with plenty of promise which thankfully isn’t squandered at all. Whilst Riley may appear to be the main character in the story, in fact she is not as most of the story plays out in her head, allowing Docter to explore a lot of interesting elements by examining the inner workings of the mind.

What ‘Inside Out’ manages to do is to twist the standard ‘growing up is hard’ angle in such a way as to examine it more deeply, giving older viewers more heft behind the story whilst also delighting younger ones with gorgeous animation, brilliant voice acting by the likes of Amy Poehler, Mindy Kaling and Phyllis Smith and a mix of fantastic jokes and heartfelt, powerful moments that ensure that you’re either laughing or crying. While lots of animated cinema is often associated with primarily being for children, ‘Inside Out’ is a true example of a film that caters to all ages, providing something for everyone, whether it’s jokes or relatable moments.

Sure, it does have a few problems. Some have accused the way the male and female characters appear to have stereotypically gendered thoughts when we get a glimpse in to other characters’ minds (Riley’s dad thinks about sports, while her mum fantasises about possible romantic endeavours) of being too simplistic but this in general is played for laughs and isn’t that much to worry about. The film’s main issue is the fact that it gets a little bogged down in its middle section, bombarding you with a barrage of wacky realms of the mind but only using them in passing while the characters attempt to make their way back to the control room. This however is soon forgotten as the film picks up and hits its stride again, making it very hard not to feel emotionally connected with the characters, whether they’re in Riley’s head or in the outside world. Oh, and watch out for the end credits sequence, which is hilarious and definitely one to stay behind a little bit for.