Nicolas Cage is definitely the actor equivalent of marmite. By turns manic, intense and bordering on, and reaching, ludicrousness in many of his films, Cage is about as divisive as it gets in the movie business, with both hardcore fans and haters in almost equal measure. There’s also those that think the talent that ate up the screen in films like ‘Leaving Las Vegas’, ‘Wild at Heart’ and ‘Adaptation’ is always there, lurking even beneath all the unadulterated stupidity that envelops many of his films, and there are so many of them. The trailer for ‘Joe’, David Gordon Green’s latest project, made it clear that Cage was taking this role a lot more seriously, than he could have done, but has he got his old mojo back? 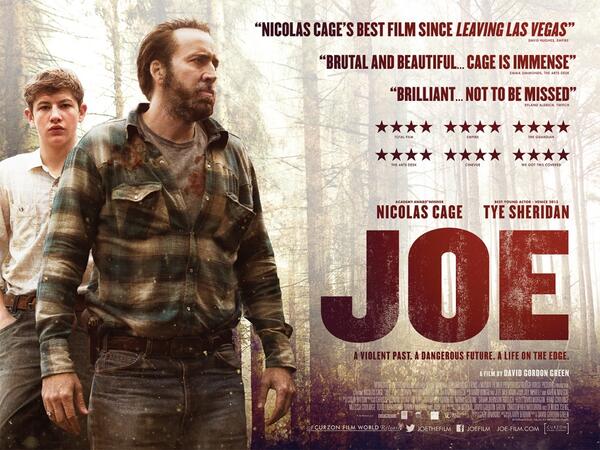 The answer is he definitely has. Having already dialled the craziness back for 2013’s drama ‘The Frozen Ground’ to general success, he puts in another carefully considered performance as the titular antihero who gets involved with a teenager who has a lot of problems at home, played brilliantly by Tye Sheridan, of ‘Mud’ fame. The striking and powerful thing about ‘Joe’ is its naturalistic approach harking back to the likes of John Steinbeck with its raw sense of realism and powerful, genuine dialogue. It’s quiet, almost unassuming in the way it tells its story, and thus becomes a hard-hitting slow rumbler that gains momentum without you even noticing it, creeping up on you with a loaded and dense atmosphere and some edgy, intense shotmaking that Gordon Green has done extremely well to engineer.

A film such as this wouldn’t work nearly so well without universally good performances from its cast, and it definitely gets that. Third lead Gary Poulter, a real life drifter who Gordon Green signed up even when the studio expressed reservations about his casting puts in a performance that only someone who has been plagued by the problems is character Wade is going through could possibly manage. Visceral, threatening and always vulnerable, Poulter excels, and his tragic demise post-production after succumbing to alcoholism is one of the saddest tales in cinema.

Gordon Green will be hugely glad that he’s managed to make a film that is almost exactly what he wanted, hard-hitting and startlingly real, ‘Joe’ is a piece of work that while not entirely perfect shows just how far a carefully built and well-honed atmosphere can take a film, making the character’s struggles seem all the more intense and exacerbating the sense of dread that the film makes us feel so well. It’s one of those rare delights of American cinema that overcomes its missteps, in this case a couple of misconstrued and uninteresting scenes involving some prostitutes, to produce something that embraces the scenery and uses it as another character, setting the mood not by telling you, but by showing you, be it on the frown that Joe wears almost constantly or the bruises and marks on Sheridan’s character Gary’s body. It succeeds in being powerful without ever being overbearing and is proof that Gordon Green, when he doesn’t decide to make rubbish comedies like ‘Your Highness’, is a very talented man behind the camera, and that Cage is a very talented man in front of it. Even those pesky bees from ‘The Wicker Man’ finally have to attest to that.