When ‘Kick-Ass’ hit the scene in 2010 it brought with it an air of freshness and a casual, amusing tone that somehow defied its bone-crunching violence and propensity for the most offensive swear words. Since the film made more than triple its budget a sequel was inevitable. Jeff Wadlow’s announcement as both the writer and director could have been considered as damning considering his meagre and frankly boring CV, but there remained optimism that he could at least maintain the tone of Matthew Vaughn’s original. 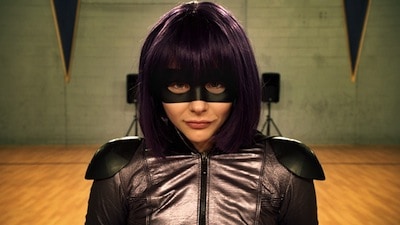 And he does, to an extent. Wadlow’s film meanders happily in tone ranging from the comically violent to the ridiculous and even manages to fit in some emotion. While this sounds like a good mix, it brings up a telling difference in the franchises’ two different directors. Vaughn managed to put all these together to make a film that felt like it never jarred in tone, whereas Wadlow’s film feels very jarring as we stumble from one theme to another with no real link to put them together.

Wadlow has the same problem with his script, which feels like a weird mixture of ‘Watchmen’ and ‘Mean Girls’ while still grasping at a childish storyline he doesn’t quite know how to present. The themes expressed, those of persecuted superheroes and the increasing numbers of masked vigilantes feel a bit like they’ve been lifted out of the former and put through the ‘Kick-Ass’ story machine, which throws them back out as wacky, shiny, crazy people it then enjoys riffing off and cracking jokes at. Its funniest moments seem detached from the film itself, single scenarios where jokes are derived from the craziness of the situation rather than any sort of chemistry. Chloe Grace Moretz’s performance is the best thing about it all as she establishes herself as an impressive young actress who may be even more capable without Nicolas Cage swanning around stealing her thunder just by exuding his aura like he does in the first film.

Other performances by the likes of Jim Carrey and Donald Faison are suitably well caricatured; with Carrey really pulling out the big guns in so much makeup he is decidedly unrecognisable. His usual over-the-top acting style really comes in handy as he fills the whole Big Daddy left from the first film with his usual charisma. These performances are offset against Aaron Taylor-Johnson, who plays main character Dave with the same bewildered normality that it really works pretty well. Christopher Mintz-Plasse’s villain Chris D’Amico is decidedly unfunny for the whole film however, as the subversion of the archetypal itself becomes a twisted and boring version of the stereotype.

His henchmen also grow to become progressively more annoying as they play to every stereotype in the book in such a way that the joke dies quickly and you’re left watching somewhat numbed as a gigantic Russian woman bulldozes her way through various costumed vigilantes with the fantastic moniker of ‘Mother Russia’, grimacing at everything in sight. This compiled with other downright stupid moments, like the ending of Hit Girl’s Mean Girls-esque sideplot, just serve to devalue the film completely.

Kick-Ass 2 is as stale and repetitive as the first was refreshing, but it’s almost redeemed by great acting performances and a sense of enthusiasm that cannot be denied. Still skirting round the edges of distaste, it probably won’t cause quite the uproar the original did despite Carrey’s sudden U-turn on the violence of the film and the mini-scandal surrounding that, but many will still take issue with its gratuitous edge. This, however, is not its main problem at all, which namely is that it’s going to be in the shadow of its predecessor, the cleverer, more tightly plotted of the two, and left to wallow in that space where a sequel wallows, with glimpses of potential mellowed by a murky inevitability in its contrived and thoroughly predictable nature.