In some respects, new action comedy ‘Let’s Be Cops‘ already achieved something, in that it took two relative small-timers (Jake Johnson and Damon Wayans Jr.) and managed a mass-release with very little star power. Johnson and Wayans are far from unknown commodities, but with Johnson known primarily for television roles and Wayans a B-lister at best, it’s almost surprising this wasn’t a straight-to-DVD sort of situation. That said, however, this film was doomed from the moment it was branded as a “buddy cop” film, pitting it up against some truly fine comedies from the past decade or so. 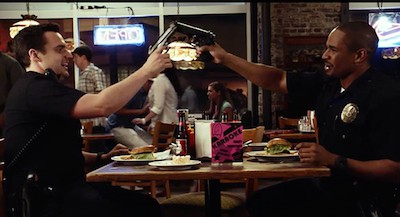 Perhaps the best of the buddy cop comedies is the Simon Pegg & Nick Frost film ‘Hot Fuzz,’ a London-based comedy of errors that’s as funny now as it was when it was released in 2007. On Picturebox’s movie blog, a writer put together a retro-review and took an in-depth look at some of Pegg and Frost’s work. Ultimately, it managed to brilliantly sum up what makes a successful buddy comedy with the following statement: “the partnership is wonderfully funny… not just laugh-out-loud funny, but crashing-through-the-fence brilliance.” This is how these comedies take root: with the partnerships at their core, which if done properly can elevate a film from humorous to memorably hilarious.

Unfortunately, as a Niner Online review stated fairly bluntly, ‘Let’s Be Cops’ fails to live up to the standard set by films such as ‘Hot Fuzz’ or ’21 Jump Street’ (and we might add ‘Super Troopers’). This is all because of the fact that it embraces and embodies the clichés of the genre, rather than needling and mocking them with any sort of wit or cleverness.

The premise, though simple, was actually very promising. Johnson and Wayans play the parts of Ryan and Justin, two buddies who casually dress up as (very realistic looking) cops to attend a costume party. When unexpected events lead to their being mistaken for real cops, the two decide to have some fun with the idea and begin recklessly impersonating real officers. Naturally, from there, they get in over their heads. As the film chugs along, they find themselves mixed up with, you know… actual police work. The dangerous kind.

Again, simple but promising. Unfortunately, after a fairly amusing opening 30 minutes or so, this film didn’t seem to know quite where to go, and the Johnson/Wayans partnership ultimately fails to live up to the spectacular pairings we’ve grown used to in successful police comedies. Something about Wayans’ performance seems more goofy than actually funny (perhaps a picky distinction, but it’s how I felt). Also, can never shake the feeling that Jake Johnson is trying too hard to be the carefree, obnoxious comedy guy—like a cheap version of Bradley Cooper’s ‘The Hangover’ character. I’m not so sure their chemistry is the issue (they have their moments, for sure) so much as the fact that neither one is a particularly compelling comic character as an individual. Fans of ‘New Girl’ may disagree, but it’s hard to argue that there’s anything stellar about these two in ‘Let’s Be Cops.’

At the same time, however, it’s unfair to blame the talent entirely. One of the great sins in screenwriting is to launch a half-finished idea, and it feels like that’s what happens here. A relatively original concept with plenty of comedic potential ultimately devolves into a generic and immensely forgettable bit of crime comedy. I’ve seen worse comedies, but this is for one of those desperately bored evenings when you crave mindless distraction.