Woody Allen’s amazing ability to churn out films at a startling rate of knots continues with this year’s offering ‘Magic In The Moonlight’. Boasting a leading pair of Colin Firth and Emma Stone, Allen uses his draw as a Hollywood powerhouse to bring together the two A-listers for a film that definitely boasts the charm of some of his previous masterpieces, but not quite the consistency or the subtlety to be anything more than a passing fancy that loses its way pretty substantially by the end, the contrivances pushed just a little too far. 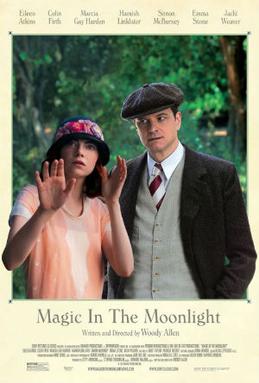 That is definitely not to say that the film is boring or unbearable, indeed for the majority of the time the film is eminently watchable, with Firth putting in a great performances as the witty and sarcastic illusionist Stanley while Stone is suitably alluring as purported medium Sophie Baker. The script, in typical Allen style, raises a lot of smirks and the characters all have interesting things to say, but it’s all far too whimsical to have any lasting impact, failing to resonate  on anything more than the surface level, not managing to connect in the way films like ‘Midnight In Paris’ managed to, and being nowhere near as hard-hitting as last year’s critically acclaimed ‘Blue Jasmine’, which was definitely on the opposite end of the scale to this. Where ‘Magic’ is light, ‘Jasmine’ had consistent dark undertones that showed that Allen has a wider range than some, who think his feet are grounded in intelligent, light-hearted romcoms and while reverting to type isn’t necessarily a bad thing at all, this just seems like a retreading of old ideas.

Ultimately this is a film perhaps to kick off an Allen omnibus, something to get you in the mood for his classics while breezing through it without much thought, waiting for the likes of ‘Annie Hall’ to start. The idea itself seems to run out of steam at the end, with a farcical resolution that glosses over the issues that it causes, and becomes so introspective and contrived that some the plot seems to take a backseat to explore the nature of love and its relation to Stanley’s realist outlook for far too long to be interesting, just to drive the point home that love isn’t rational like some Woody Allen version of Barney. The point remains though that until the ending, which definitely should have been more melancholic and far less cheesy, it’s perfectly serviceable fare that will not live long in the memory but will tide us over til the next film which is, predictably, due next year. Whatever you think of the guy, he’s a film-making machine so hopefully that one has a little more substance.