Don Cheadle’s new film about jazz legend Miles Davis tries to shake up the conventions of the traditional biopic by telling some of the icon’s story through fiction, or ‘metaphor’ as Cheadle, the creative mind behind the film, puts it.

Cheadle directs, co-writes and stars as Davis, and must be praised for his commitment to his adventurous style, which blends parts of Davis’ real life with fanciful tales of car chases, drug runs and stolen tapes. The most remarkable aspect of the film is Cheadle’s central performance. His version of Davis is extremely convincing, the scratchy voice and uncaring abrasiveness often stealing scenes. It’s true that the film enjoys playing the tortured genius card, but it doesn’t get old and manages to avoid feeling contrived. 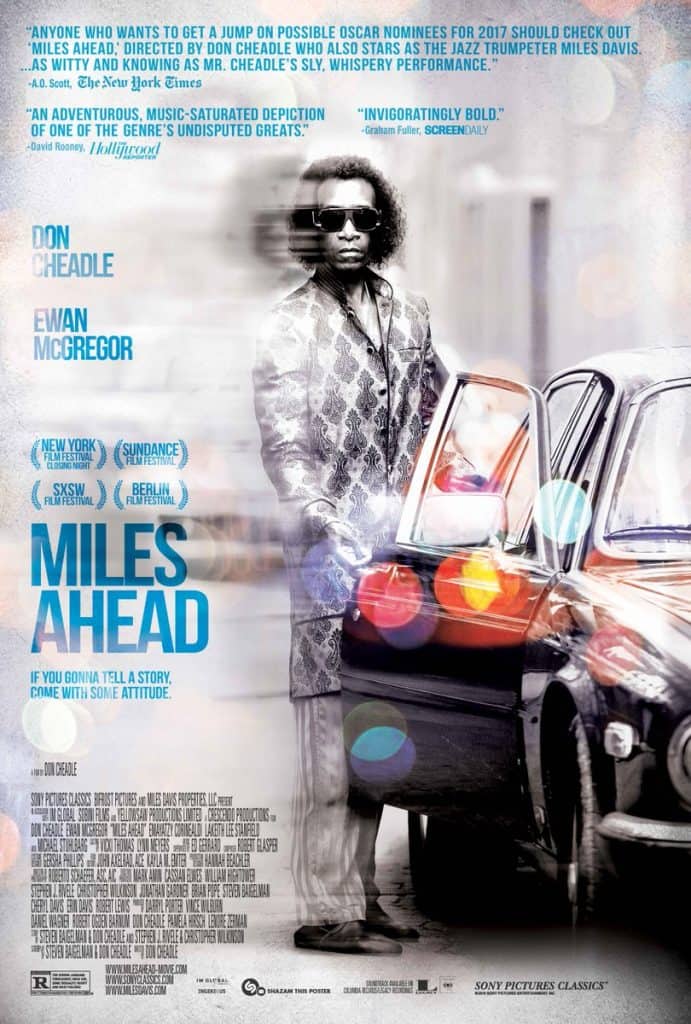 Cheadle uses some great directorial trickery to take you in to Davis’ thoughts, scenes often transforming to fit his state of mind. He interweaves these flashbacks and surreal moments with the narrative, which follows Davis and Ewan McGregor’s Dave Braden, a journalist seeking an interview with Davis, and the shenanigans they get themselves involved with while attempting to retrieve Davis’ lost music.

While there are flashbacks and moments of Davis at his musical best, the film portrays a period in his life where he hasn’t made anything new for quite a while and is feeling the pressure both from his record company and in his wallet, wanting money from the company for past recordings and session tapes. Strangely enough for a film that is attempting to do something different to traditional biopics, these are the sections where the film works best. They are still semi-fictional of course, as Dave is never far away and a young protégé named Junior quickly finds his way on to the scene in a few entertaining moments, but they are the sections, together with the flashbacks to past life events, that give you the most insight in to his character and truly tell you something about the man.

On the other hand, while the chases, gun fights and general tomfoolery are quite entertaining and the dialogue often amusing, it sometimes feels like we’ve been transported in to another film where the main character simply happens to be called Miles Davis, and it instead becomes some sort of gangster romp with a Davis-inspired soundtrack. This still represents an admirable attempt to shake the formula up though, and Miles Ahead can be enjoyed for what it is: an adventurous, brave film that’s not afraid to try things, even if those things don’t always work, and that does give you a glimpse in to Davis without ever sugar-coating him or justifying his behaviour, but always portraying him as nuanced and believable.