The success of a thriller like ‘Prisoners’ is measured by its ability to leave you hanging on the edge of your seat with an uncomfortable knot in your stomach and yet  inexplicably have you glued to the screen, unable to look away. These characteristics, regardless of subject matter, are pretty essential to its staying power, and this film certainly has it in droves. 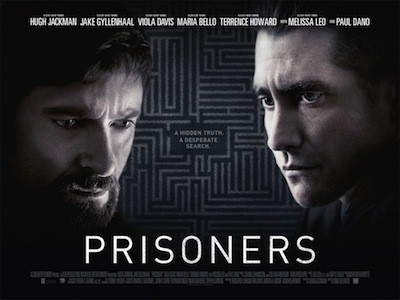 Boasting an all-star cast featuring the likes of Hugh Jackman, Jake Gyllenhaal, Melissa Leo, Paul Dano and Terrence Howard, it certainly doesn’t waste them. Gyllenhaal puts in a straight-edge performance that despite its generic sensibility is consummately done, and his no-nonsense policeman makes for an engaging presence as the script ensures that we are invested in his attempts and growing frustration to get to the bottom of this seemingly unsolvable case, the only rock in a film that profoundly affects all the other characters.

Hugh Jackman’s character epitomises this. He channels some of the Wolverine’s aggression in his portrayal of a loving father who is twisted by the disappearance of his child, to the extent that he ends up doing some terrible things himself. His anger and frustration is etched on his face in every shot, embedded in a furious desire to find out what happened to his daughter and portrayed with such a level of intensity by Jackman that it is-understandably-almost difficult to watch him. He is wonderfully balanced by Terrence Howard’s more doubt-filled, insecure character who questions the morality of their actions and deals with his own daughter’s disappearance in a very different way.

Much praise also has to go to director Denis Villeneuve and in particular to cinematographer and film legend Roger Deakins for a beautifully shot film that oozes tension out of every pixel and has a dark sensibility about it that emanates directly in to the viewer’s mind. He manages to convey the bleakness of the situation brilliantly and the film never loses this atmosphere, succeeding where many others don’t to maintain it for the duration, which in this case is a quite length two and a half hours. The camera work and able direction also make up for some plot twists that are more than a little clichéd, and when that’s the case you know it is genuinely perfect. Every shot feels exciting to look at and explore and each conveys meaning that ends up being essential to piecing together what is on the whole a well designed “whodunnit” film that has aspirations of being a lot more than that.

Its examination of themes relating to how evil can envelop the afflicted if left unchecked and also its portrayal of just what humanity can do when desperate is let down by a final half-hour that still serves to be utterly nailbiting but loses some of this more intelligent edge. It almost feels like more of a disappointment because of these aspirations, but the fact it battles through this inadequacy is another strength of the film as it works to justify its very long runtime, never actually feeling like it didn’t have enough to cover. ‘Prisoners’ may not be as good as it wanted to be, but it certainly ticks a lot of boxes and leaves you with a lingering sense of unease that is actually quite hard to shake. If you can forgive a few dips in writing you will definitely find it a fulfilling experience and thriller fans have a lot to bite in to, so if you’ve got two and a half hours to kill or simply haven’t had your monthly fix of Mr Jackman’s face or Mr Gyllenhaal’s piercing eyes, it’s certainly worth a look.