We know what you’re thinking. A seminal Disney film has its origin story bankrolled by no other than Disney? It’s destined to be a schmaltzy, uninteresting Disney advert masquerading as a genuine drama, but for once you’d be wrong. ‘Saving Mr. Banks’ features Emma Thompson as P.L Travers, the author of Mary Poppins, and Tom Hanks as Walt Disney, both of whom inhabit the roles perfectly and make this particular story a heartwarming, believable and genuinely involving one that definitely is schmaltzy, but overcomes it with involving human drama that is fantastically performed by an ensemble cast featuring the likes of Colin Farrell, who really shows just how much he can act here, as he is wont to do every other film or so. 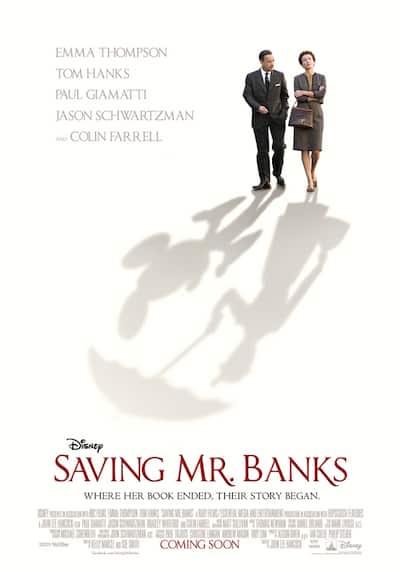 Thompson has always been great at inhabiting roles with great conviction, from Professor Trelawney through to Nanny McPhee, and these sorts of roles have shown that she is able to work both as a comic and a dramatic actor, having won Oscars for roles in films such as the period drama ‘Howards End’ as well as excelling as the eccentric that she is so great at portraying. In this performance that eccentricity remains, but it’s added to as she exemplifies Travers and her stubborn, forthright and altogether sour attitude wonderfully and often to great comic effect.

Her performance is easily juxtaposed with that of Tom Hanks as Walt Disney, full of joviality and optimism, all twinkling eyes and broad smiles, determined to turn Poppins in to a musical that he’s adamant everyone will enjoy. Their conflicting personalities and Disney’s quest to understand why Travers is very reluctant to have anything done to a story that she is so attached to make for compelling viewing, and these interactions when interspersed with the flashback sequences tell a story that serves almost to humanise Travers. We’re made to sympathise and understand rather than just judge the woman who didn’t ‘get’ film and dismissed one of the greatest in history offhand, which is a success both of Thompson’s portrayal and a strong script, which in turn is a mark of the film’s ability to establish an emotional connection with you and not just take you on a Disneyland-esque ride through events, but take the time to ensure that you get to know the characters and in particular the intriguing, baffling Travers.

Other very good performances come from a strong support cast that features the likes of Paul Giamatti, definitely one of the best actors around, in a wonderful little role as Travers’ driver who Travers almost takes the entire Disney journey with, as well as Jason Schwartzman and B.J. Novak as the songwriting Sherman brothers and a strong performance by Bradley Whitford as Don DaGradi, the film’s scriptwriter, all of whom display their bafflement at Travers’ character as the at first awestruck crew soon realise that she definitely isn’t what they thought she was. All these great acting performances, together with a taut script and strong direction from John Lee Hancock and with a story that is genuinely interesting, in particular for Poppins fans, ‘Saving Mr. Banks’ is an admirable effort and despite its definite schmaltziness  that is almost bound to happen with a PG portrayal of these events, it’s the fact that it makes it such an emotionally involving experience that makes it a successful one.