Whatever Guy Ritchie has done to make a mark on our own individual movie culture, that is the image and expectation with which we greet his latest work – ‘Sherlock Holmes’. But this time round, Guy has veiled his work of art within the “gothic”… 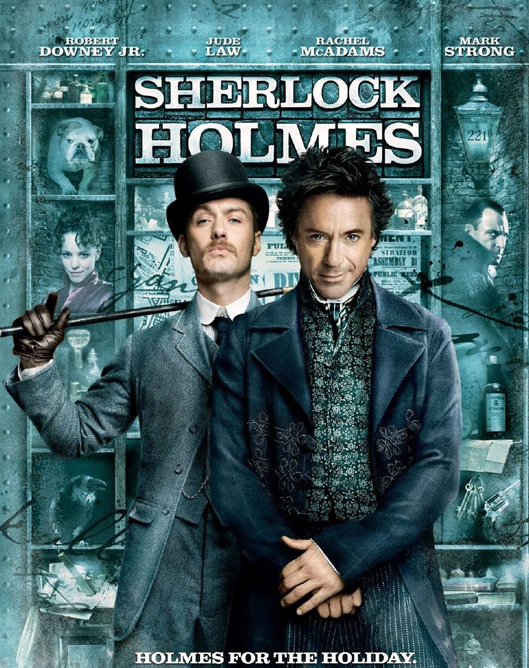 He has always shown signs of a dark side to his mind, but now, the dark side has reached greater depths. Guy’s ‘Sherlock Holmes’ resembles somewhat ‘The Hound of the Baskervilles’, hopefully this old comparison isn’t too patronising, but all that black ‘n’ blueness, the mucky streets of old London, the macabre and mystery are obligatory elements that make Sherlock Holmes a great cinematographic character. That is why ‘The Hound Of The Baskervilles’ is the most talked about Holmes tale. There have always been great detectives in the world of the moving image, but none like Holmes. Sure, Columbo was, is and will always be the greatest of all (arguably), but Holmes is the one that looks good on a feature film, not because of his genius but because he looks good, it looks good. Guy Ritchie understood that fact, and that is why he embraced it with a tale of gothic style. You will notice that no-one calls it a gothic tale – but it is! Think of the elements, according to David Punter when he refers to “Spine-tingling terror” – God-defying darkness, the mystery of evil, flower-delicate beauties, monstrous beings with extra powers to crush your hopes in justice and goodness, castles, archaic vocabulary. Guy Ritchie could be on a journey into darkness, but we will more than likely see his next film move in a completely different direction.

In the meantime, the usual humorous violence, wittiness, unexpected and highly coordinated punch-ups and camera angles are ever-present. These elements that make Ritchie movies haven’t yet become dull. Unlike Quentin Tarantino who’s work is now so predictable. The experience of going to the cinema for Guy’s latest work is truly cultural and something Brits should be, if they are not already, very, very proud of. Guy Ritchie continues to be one of the best in the movie industry, casting known and unknown actors – Jude Law was audaciously recruited to play Dr Watson, Mark Strong is the delicious villain Lord Blackwood, and Kelly Reilly adorns the screen as the exquisite Mary Morstan.

Robert Downey Jr isn’t the most likely candidate for a gothic tale, but he does have the wit, charisma and physical agility to perform Holmes convincingly. However, it would have helped immensely if the actor had pronounced his words more articulately for a clearer sound. His mumbles might have added more weight to the mystery of the tale, but they were too… err, mumbly. The English accent of the American-born performer was un-surprisingly convincing because Downey Jr had already conquered the British cynic with his rendition of Charlie Chaplin – he deserved an Oscar for that one but only got nominated. For this effort, he might get nominated but will unlikely get the Oscar.

While we’re not sure the performance is Oscar-worthy, the film’s leading man does deserve to be nominated for his interpretation of a dope-head, eccentric, genius (and ingenious) detective with a tendency for clinical if not manic depression. Robert Downey Jr is very humorous, very clever and a fantastically underrated actor. Thank God he’s out of prison and working again.

Watch the trailer below: