Gritty British dramas have lost their way a little bit since Guy Ritchie and Danny Dyer decided to slowly murder them from within, so ‘Starred Up’, despite a very promising trailer that suggests to us that lead actor Jack O’Connell is really coming out of his shell as an actor on the big screen, and that Ben Mendelsohn, as usual, is a wonderful cipher in this sort of film, could still have been a minefield for falling in to Vinnie Jones tropes and talk of ‘canistahs’ that have just passed in to amusing, if they ever were edgy in the first place. Luckily director David Mackenzie ends up making his best film yet and it lives up to a lot of its promise. 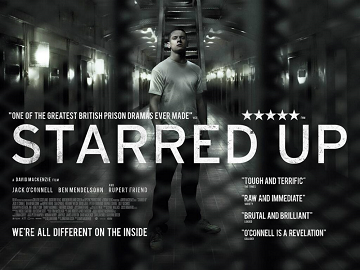 Indeed, Jack O’Connell’s performance is truly revelatory and since his character is pivotal to almost every frame of the story, it definitely has to be. His character Eric is a very nuanced, very interesting character who isn’t played as a one-note hardman in the ilk of Dyer or even Statham, and O’Connell manages to blend his more abrasive, violent side with a sensitive, more vulnerable side that despite his youthful machismo does come through in various moments throughout the film. Juxtaposing these conflicting sides of a character that could be so predictable is definitely a difficult thing to do, but O’Connell does it with a believable ease that we’re instantly on his side, even through his abrasive, violent outbursts and blatantly wrong decisions.

Rupert Friend and Ben Mendelsohn also excel, playing different sides of a coin for Eric as father figures and mentors trying to help him get by in prison. Mendelsohn, who has made a career out of playing sleazebags on the big screen with a wonderful ease, plays his character predictably well, channelling a man who wants to do right by his son, but doesn’t really have the capacity to do so with his compulsive lack of empathy and controlling nature. Friend, on the other hand, plays an understanding and accepting voluntary therapist intent on helping Eric fix his problems, but who is constantly undermined by the system. It’s Jonathan Asser’s writing that truly makes his interactions with the other characters memorable, giving us an insight in to the minds of convicts and prison guards alike when  they come in to contact with him.

The success of this film comes in its no-holds-barred portrayal of British prisons and the problems and conflicts therein. Bolstered by a powerful performance by O’Connell, its grittiness is always believable and even if it may bend the truths of a real prison a bit, its exploration of the interactions between the hierarchies of a prison society is much more refined than the average prison drama. ‘Starred Up’ is an unassuming success that is definitely one of the grittiest and best films of its ilk of the past few years, even if it doesn’t quite have enough to completely blow you away.