“Broken… and done.” Christopher Nolan’s grand third part of his Batman trilogy is, first off, an undisputed masterpiece, and, curiously, not what one would expect. To begin there is no fair way to review this film without spoiling anything for the audience except to say that the story, as alluded to in the trailers, continues years after ‘The Dark Knight’ ended, Batman in hiding and Bruce Wayne in reclusion, then, as fans of the Knightfall comic saga will know all too well, the biggest, baddest bad guy of them all, Bane, shows up on the scene to literally tear Gotham down. Catwoman makes an appearance too, less akin to Pfeiffer’s incarnation and, as Anne Hathaway herself said, fits perfectly in Nolan’s world. More than this we cannot say without giving crucial elements away. 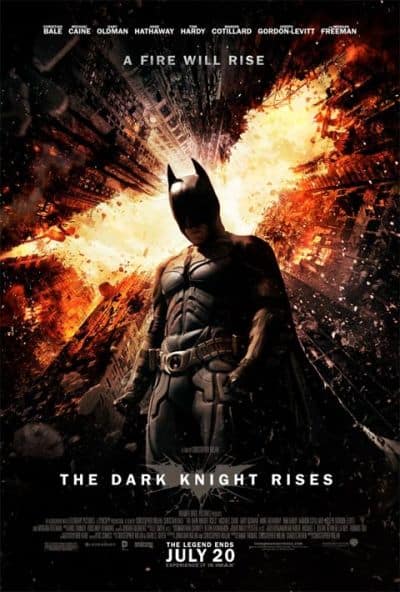 The tone here is cold, the atmosphere is stoic, the mindset is pensive, the tale is broad, yet the reaction is “awesome”. Every performance is stellar, Michael Caine is heartbreaking as Alfred, Christian Bale (mostly sans his trademark gruff voice) is the best he has been the entire series, as is the always watchable Gary Oldman, especially here is Joseph Gordon-Levitt’s hard driven policeman who, for someone as young as he is, steals almost every scene he is in.

The Dark Knight Rises takes the best pieces of the last two parts and melds them perfectly; cleverly harking back to ‘Batman Begins’ and seamlessly knitting in elements from ‘The Dark Knight’ to create a meaningful trilogy from a well-loved series that, frankly, wasn’t intended to be a trilogy and this is down to Jonathan Nolan and David S Goyer’s masterful writing.

So, if ‘…Begins’ was the most character driven and commercially action packed, ‘…Dark Knight’ was tense and the biggest spectacle then ‘…Rises’ is the most emotional journey and the most satisfying conclusion to the series. It’s long, in places difficult to watch, narratively confusing but if you stick with, when all these elements come together, it you’ll most definitely not be disappointed.