As a comic, Richard Ayoade is undoubtedly talented. His deadpan delivery and wonderfully written sketches mean he rarely fails to amuse, and after his opening attempt at directing a full-length feature film he showed he’s also very good as a director and screenwriter, creating something intelligent, amusing and touching all at the same time in the shape of ‘Submarine’. With this, his sophomore effort, he enters new territory, proceeding in to the murky territory of the black comedy. This is a rewarding but tricky genre where the humour needs to be intricate and ensure it’s not jarring, and Ayoade ensures that he gets just the right actor to deliver his lines so that is the case. 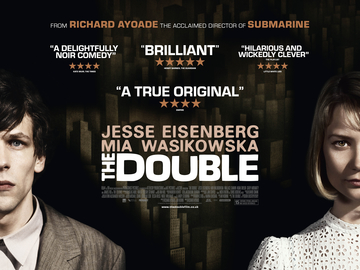 Indeed, the roles are so suited to Jesse Eisenberg it’s almost as if Ayoade envisioned him when he adapted Fyodr Dostoevsky’s source text in to the modern age. His quirks and mannerisms are perfect for both of his characters: the clinically introverted Simon James and the outgoing, fastspeaking, charming James Simon and as a result he fits seamlessly in to both roles where there could have been a disconnect. It’s his delivery of the lines as both characters that gives them added weight, giving them a more human or a more ridiculous, almost malevolent edge depending on which one he is. Eisenberg has always been known as an actor so good at playing the socially awkward and nerdiest of characters to a degree where he has been typecast, and despite the fact that those aspects are certainly present here, the command he shows over both roles shows that he genuinely is a very talented actor. Honourable mentions must also be given to the brilliantly consistent Mia Wasikowska and to Noah Taylor in a small but nevertheless highly amusing role as one of Simon’s co-workers.

Both stylistically and thematically influences from the likes of Terry Gilliam and David Lynch are there, Erik Wilson’s dark, ambient cinematography bringing to mind some of Gilliam’s best work, particularly the timeless classic ‘Brazil’. It also has smatterings of Lynch’s ‘Eraserhead’ and even some tinges of the dripping, atmospheric ‘Dark City’,  all of which is aided by a wonderful, evocative score by Andrew Hewitt that wonderfully amalgamates all these influences and gives them subtle tweaks with a score full of mechanical noises, futuristic twanging and loud pop music that never fails to create atmosphere.

‘The Double’ is a marker of just how engrossing cinema can be when it’s at its best. Simultaneously tense, eerie, funny and downright creepy it’s an experience that sucks you in and refuses to let go until the euphorically mesmerising crescendo. Ayoade’s vision is stamped all over it, and you can make them all out at different moments of the film as they match his deadpan, oddball sensibility and are never compromised in favour of something less weird, which is always welcome. Yes, it definitely wears its influences on its sleeve and will be readily grouped in with similarly atmospheric, noirish fare but it stands towards the top of that list and definitely doesn’t disappoint.