Film Review: ‘The Girl With The Dragon Tattoo’

Home » Film Review: ‘The Girl With The Dragon Tattoo’

At first mention of a Hollywood version of Stieg Larsson’s worldwide best-selling novel ‘The Girl With The Dragon Tattoo’ so soon after the successful Swedish film version, made many groan with trepidation and left the masses wondering exactly “Why?”. Yet, after seeing David Fincher at the helm as well as a predominately Swedish and European cast, one can answer that question: because the English Language version is different and different in the best possible way. 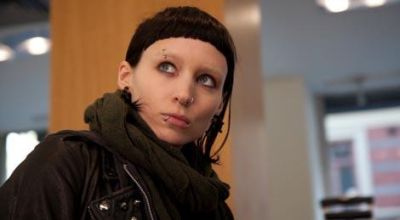 ‘…Dragon Tattoo’ is brilliant and Fincher is probably the best choice as director, his in-depth intricacy with past films such as ‘Se7en’ and ‘Zodiac’ show that he can delve into the details needed as a suitable homage to the novel without losing pace. One shouldn’t really compare the two European and US films, as Fincher himself stated that they were coming at it from a different angle; certain scenes and sub-plots which were left out of the Swedish version are found here and vice-versa, this along with the specific cold atmosphere that Fincher injects leave the two practically incomparable.

Now, the directing style here is rather restrained for Fincher, which appears to be a recent trait of his, since his hyperbolic pretentious state of ‘Panic Room’ and the sombre fairytale feel of ‘Benjamin Button’. ‘…Dragon Tattoo’, like ‘The Social Network’, allows for the screenplay and actors to take control of the screen rather than littering it with effects, and where Fincher really excels is in the mood of the piece, which is spot on with the tone of the book, the icy bleakness sets in from the first few frames and Trent Reznor and Atticus Ross’ ghostly detached score carries a hopeless encroaching feel throughout descending into a frenetic climax. Debatably the rape and torture scenes seem somewhat played down from what one may expect, although we believe this is for the best. This is a very cerebral film and not a part of the ‘Saw’ saga, a lot of the violence is implied rather than made as spectacle, which, we feel was the right decision to make and therefore the film manages to strike a perfect balance between disturbing and entertaining (a difficult task to achieve).

Inarguably, the two best things about ‘…Dragon Tattoo’ are the two lead actors Daniel Craig and Rooney Mara. At first one could be caught thinking “Bond as Blomkvist? No way”, but Craig manages to create a very believable and faithful Mikael where he ditches his action movie handle, gains a few pounds and lets his acting talents do the work rather than flexing his muscles through the film (fans of his shouldn’t worry though as he does manage to spend a good portion of the movie naked). Most impressive, though, is Rooney Mara who is absolutely outstanding as Lisbeth Salander; (her take on the character differs somewhat to Noomi Rapace’s) she brings a greater vulnerability and introversion to the role whilst still kicking major ass when she needs to. The chosen ways of dissecting Salander’s personality and various talents are explored with intricacy and grace and never once fall into cheesy schmaltz and are, in fact, a very authentic display of the novels character. One can not forget Stellan Skarsgård’s brilliantly creepy Martin Vanger, Christopher Plummer’s charismatic Henrik Vanger and the enigmatic Steven Berkoff as Dirch Frode all vying amongst each other to steal the scenes.

As an adaptation the film is incredibly close to the source material; the feel, the characters and the major plotlines are all there even if some are in mixed order. It may not be as grim as depicted in the novel but that doesn’t make it any less effective or satisfying. We believe that even the most diehard Millennium trilogy fan will be satisfied with Fincher’s adaptation. As a standalone film it is fantastic; quick-paced, brilliant direction, visceral, haunting, involving and still disturbing in the torture scenes. The characters are pretty relatable (given the harsh circumstances of the story), and their on-screen chemistry is great. Fincher makes sense out of the enormous complexity of a large and disbanded family in a very non-stereotypical “who-dunnit” way, couple all of that with some very clever editing and it doesn’t feel like you’re in the cinema for over two-and-a-half hours. ‘The Girl With The Dragon Tattoo’ does a great justice to a great storyline with beloved characters and is one of David Fincher’s finest films. This is a must see for everyone, even the squeamish amongst us.

For more information visit the official The Girl With The Dragon Tattoo website.