After a turbulent production process that involved a script leak and writer-director Quentin Tarantino’s subsequent decision to scrap the film and release the story in novel form, what is being billed as his 8th (in fact his 9th since ‘Kill Bill’ is two movies) film has made the big screen having gone through a number of rewrites. It’s by no means a departure from Tarantino’s other movies, maintaining his sardonic wit and ensuring that we get a veritable bloodbath worthy of any of his previous work. This time, though, he makes us wait for it. 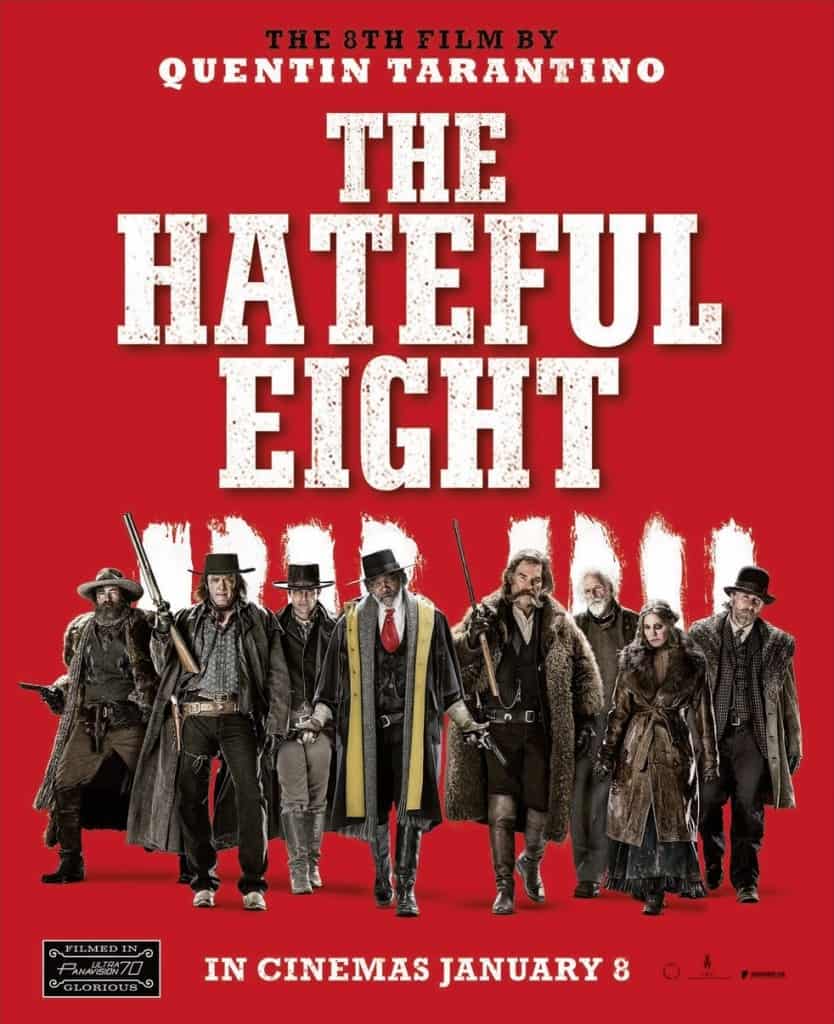 Tarantino has rarely changed the formula for his films, blending together his brand of dark wit with crazy, violent bursts of action that serve as breaks in what is otherwise a very word-heavy film. That is by no means a criticism, Tarantino’s strengths are in his ability to engross you in extended scenes of dialogue, the interactions between characters often harsh but always amusing, even when they shock you. He brings together his usual team of acting buddies to take part in the extravaganza, the likes of Kurt Russell, Tim Roth, Michael Madsen and Bruce Dern all returning to work with a man who obviously builds a good rapport with his team. Most notable in his return is Samuel L. Jackson, whose character Major Marquis Warren was written specifically for him and who Jackson evidently has a great time playing, stealing scenes with some darkly comic speeches and an excellent sense of timing.

While the usual suspects of the cast are all reliably strong in their roles, particular mentions must also go to Walton Goggins, who finally gets a chance to excel on the big screen as Chris Mannix, and Jennifer Jason Leigh whose performance as Daisy Domergue has got her nominations for many awards shows, not least the Academy Awards next month. The larger than life performances are what bring the film to life, since we leave the expansive snowy environment of the American South behind fairly quickly for the inside of a lodge, an enclosed space where things start to kick off.

‘The Hateful Eight’ may not be the most substantial of Tarantino’s films but it’s regularly funny and offers an engaging and brutal thrillride that won’t disappoint those who are fans of his work. In Tarantino style he maybe overstays his welcome and the film could perhaps do with a little bit of a shearing, but beautiful cinematography by Robert Richardson and a great soundtrack by Ennio Morricone, who took the opportunity to recycle some of his unused work on John Carpenter’s ‘The Thing’, mean that it gets by those moments well enough. Those who criticise Tarantino for making all the characters sound like him could easily make the same criticism here, but his films always have a callous disregard for their characters anyway, and there’s enjoyment to be found in the ways that he finds to hurt them.