The story of Katniss Everdeen’s trials and tribulations are by now on almost everyone’s lips and Suzanne Collins’ brainchild certainly has done a lot to fill the void many fans feel is left by the absence of the ‘Twilight’ and ‘Harry Potter’ series these days. Having not been fond of the first film in this franchise, indeed I was pretty scathing about it, it was hard to drum up any enthusiasm for seeing this, the second installment, at all. Sure, Jennifer Lawrence is a very good actress and she carries the lead role very well, but I was simply not seeing where the hype was coming from in any of the melodramatic, overblown scenes or in the downright boring ones at all. ‘Battle Royale’, it felt like, did the whole thing a lot better and to much better effect than this ever would, at least on screen. 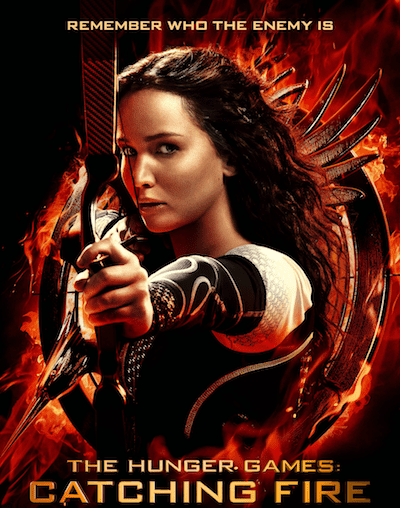 And then this film came about and shook things up a bit. Francis Lawrence comes in as director to replace Gary Ross and injects a lot in to proceedings, the main things being a sense of purpose, and a tauter, more involving sense of atmosphere as the film goes for a darker tone and succeeds at making everything feel much more weighty than in the first. Lawrence also makes full use of a cast that really does have acting prowess, as Lawrence builds on her performance in the first film and ensures that you are definitely along for the ride with her. Josh Hutcherson, decidedly unconvincing in the first film, has improved substantially too, and a superficial role in film one becomes a more emotionally involved one as he gains a more substantial personality and is clearly affected by what’s going on around him.

This more refined approach is just what the franchise needed, and it works with almost everyone, from Woody Harrelson to Elizabeth Banks and on to an infinitely more menacing Donald Sutherland performance as the malevolent president of Panem. There are, however, still residual problems that cannot be ignored. Liam Hemsworth’s character Gale seems just as shallow as before and is one of the only characters that fails to be built upon adequately, making Katniss’ whole love triangle storyline quite tiresome, and despite some affecting and well-handled scenes regarding Gale and his role in the unrest in Panem, he ultimately has a superficiality about him that cannot be denied. It is also very keen on ensuring that every aspect of the novel is involved in the film, so it clocks it at a hefty 146 minutes, meaning we’re taken through those Big Brother-esque interviews again, made to flounder in the ridiculous costumes and ponder as to how names like Caesar Flickerman ever became a thing in the future as Stanley Tucci fills in the Davina McCall role.

This sort of thing aside, its juxtaposition of the affluent Capitol and the poverty-laden, miserable districts is much better handled, and it feels like Lawrence was ready to push that 12A rating heartily to the limit, rendering everything more impactful with powerful scenes that feature examples of the oppression of the dictatorial regime, but there’s another problem here, and it’s to do with the content. Sure, the novel’s author Suzanne Collins is going for a teenage audience here, but her idea of a dystopian world, while promising, seems criminally shallow. Despite Lawrence pushing the material as far as he can in this regard, it seems that Collins reneges on exploring this relation between Capitol and districts further on a human level in favour of exploring the surface of the Capitol, with the sinister Peacemakers the only thing we ever see of the underworld. This is an aspect where many dystopian science fiction stories are much better off, and it’s definitely a shame.

‘Catching Fire’ is certainly a welcome improvement and it handles all aspects better than the first in the series, but it remains to be seen whether splitting the final novel in to two parts will ruin the good work that this one does to set the tone somewhere it needs to be set and regulate the ideas in the plot so that they work. The franchise really is teetering on the brink right now, but what both Francis and Jennifer Lawrence have ensured is that it has been brought back from simply being derivative to being something worth keeping an eye on in future. A relatively happy surprise.