Ralph Fiennes’ sophomore directorial effort looks to be about as set on box office riches as his first film, the accomplished adaptation of Shakespeare’s ‘Coriolanus’, was even if many will be hoping it will not be quite as much of a monetary flop. Despite its fiscal failings, his début showed that having  featured heavily in blockbusters like ‘Harry Potter’, the fact he has found time for these much more nuanced films is something to be happy about in itself, and in ‘The Invisible Woman’ he finds another compelling story. 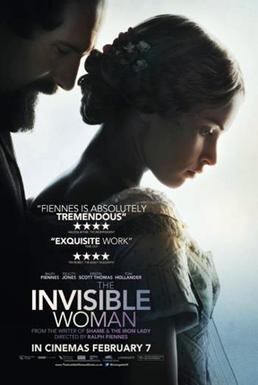 The film follows the notorious Charles Dickens through his middle years, at a time when fame has already been assured across Britain and marriage to his wife Catherine has been the status quo for many years. Fiennes portrays Dickens as a bit of an eccentric, which is to be expected since Dickens strived to entertain and enthral with his every word. He definitely makes sure that the exceptionally famous writer is a suitably larger than life character, heavily influencing those around him. That influence is best seen through the eyes of Felicity Jones whose portrayal of Nelly Ternan, the 18 year old with whom Dickens had a relationship during the final years of his marriage. Her struggle between her feelings and her position, together with any adverse effect on her social status were the affair to get out in to the press is the most interesting aspect of the film. She wrestles continuously between loving Dickens as a writer and him as a person, and struggles to allow herself to enter the relationship because of its marriage-less nature.

This internal strife that Nelly has, together with some wonderfully written dialogue and indeed charming interactions between the characters are what keep the film going, and it is easy to see that Fiennes has clear directorial talent as he engineers an atmosphere that invokes all of the swirling emotions of the film very well. It is, however, at times a little bit dry and oddly cold. Despite the portrayal of all of Dickens’ wonderful musings on life and the insights in to his writing, there is a sense that the film is relying on its atmosphere to convey anything other than surface emotion, since there is no real depth on display here. Sure, it could be that the depth is intended to appear repressed since the nature of the times demanded it, but it seems inexcusable to let a story so interesting go by with quite a few scenes that do little other than extol Dickens’ virtues. The nature of the relationship and how the two truly do interact seems like it could have done with a larger focus, and we are as a result left feeling a little unfulfilled by the end.

Nevertheless, Fiennes’ film contains a lot of strong elements that allow it to stand up on its own two feet and show that the actor-director really is as astute behind the camera as he is in front of it. ‘The Invisible Woman’ may not be as good as ‘Coriolanus’ but it certainly adds some new qualities to Fiennes’ bow, and demonstrates that a true masterpiece is just around the corner for him even if this isn’t quite it. A solid enough stepping stone along the way.