As an often intelligent and thoughtful director, George Clooney has managed to make some clever political dramas and also a powerful spy film in the shape of ‘Confessions of a Dangerous Mind’, so his ability to work behind the camera isn’t in doubt at all, despite a failed foray in to the sport genre with ‘Leatherheads’. Many were hoping for an equally intelligent outing for the actor-director here, but sadly this Second World War caper isn’t on the same level as his greats. 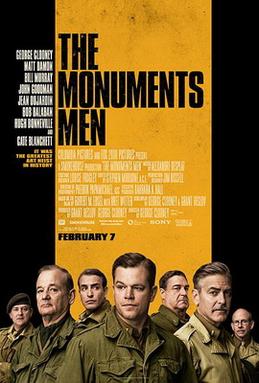 While films like ‘Good Night, and Good Luck’ and ‘The Ides of March’ are brilliantly intense, taut affairs, ‘The Monuments Men’ is a distinctly haphazard film that isn’t quite sure of itself. Clooney’s desire to get the remarkable true story of men that reclaimed stolen art from the Nazis is admirable, but it must be said that the film swings from lighthearted to downright sombre every few minutes, each normally marked with witticisms from Clooney’s character, who will  utter something poignant so we know when to stop feeling amused and when to start feeling moved. It feels a bit like we’re witnessing parts of different films about the same subject, and this makes parts of the film a little ridiculous, particularly when it attempts to put the two together.

Despite its shortcomings though, it is true that the film makes the most of its very strong cast, utilising the likes of Bill Murray, John Goodman and Jean Dujardin well, and the sense of camaraderie is certainly there throughout. It’s the characters’ interactions that make it an engaging film and these are often done with enough humour and enough drama to make almost every interaction worthwhile. Despite its disjointed feel, the individual aspects of the film are also relatively strong, bolstered by great performances that make up for any shortcomings in the script. Even Cate Blanchett’s questionable accent is saved by her rapport with Matt Damon, and together they manage to add to the drama rather than leave us to focus on whether Blanchett is trying to be German or whether her French accent is just coming out that way.

Distinctly watchable and interesting, ‘The Monuments Men’ works best when its characters are out on the field discussing the art and attempting to find it, and at its worst when it strives towards sentimentality, pressing the value of art on the future of humanity every few minutes and allowing Clooney to make one of his inspirational speeches that is essentially a mixture of every schmaltzy war speech ever made. It is sufficiently funny to make up for all this though, so you only realise that the film could have been much better after you’ve finished watching it, and it’s true that it does feel like a bit of a missed opportunity. What we have got however is by no means terrible even if it does have trouble finding and keeping its footing, and anyone interested in its premise will doubtless still have a pretty good couple of hours seeing it.