Already an accomplished writer with major hits like Lethal Weapon, Shane Black decided to try his hand at direction. The result was 2005’s excellent neo-noir comedy Kiss Kiss Bang Bang, blending Black’s razor sharp wit with a plot that was subversive, knowing and unexpectedly intelligent, and making it an underrated gem that showcases the best of its two leads Robert Downey Jr and Val Kilmer. Black followed that film up by taking on a superhero blockbuster in Iron Man 3, but he still managed to imprint his personal stamp on what could have just been a by-the-numbers behemoth, bringing that subversiveness and wit to the fore once more. The Nice Guys is Black’s third directorial effort and a welcome step away from huge franchises, allowing Black to concoct a story of his own making, and constructing something that perhaps lacks the genre-bending cleverness of his first effort, but makes up for it with a healthy amount of humour. 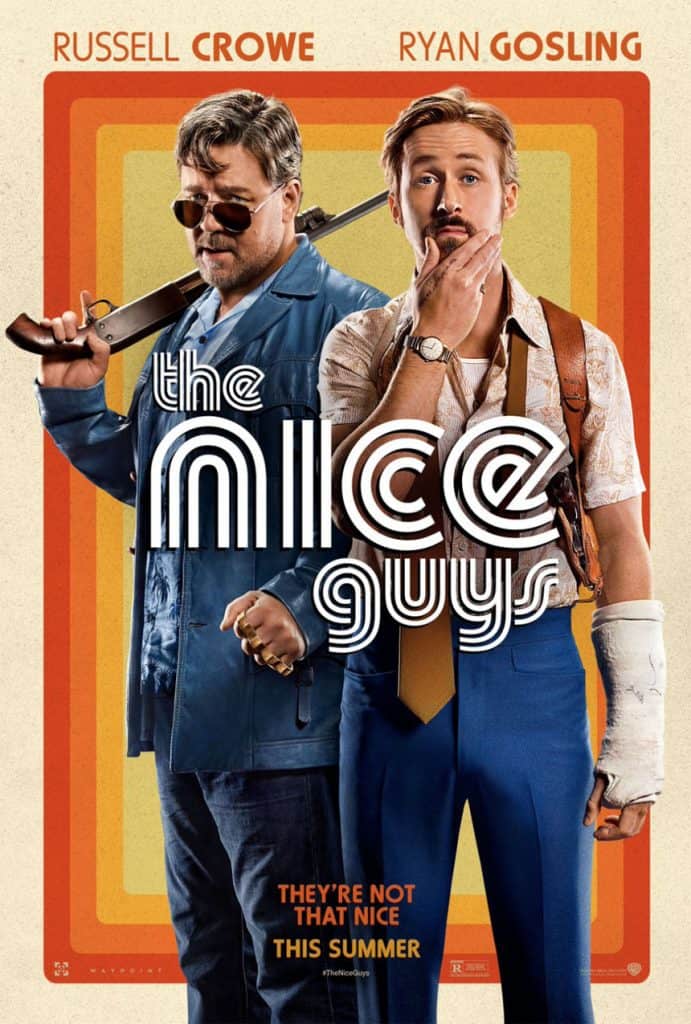 Black’s strength has always been in his dialogue, and The Nice Guys is at its best when he’s right in his wheelhouse, snappy character interactions flying off the screen in a way that is consistently entertaining and often very funny. He also knows how to bring out the best in his actors, allowing Russell Crowe to find his familiar hard-man comfort zone, but coaxing a brilliant performance out of Ryan Gosling, who proves himself to be as adept at verbal sparring as he is at physical comedy, with laughs coming thick and fast from both his delivery and his ridiculous antics. Gosling may previously have been regarded as one-note, but performances in both this and Adam McKay’s The Big Short prove that he is able to handle a lot more than previously thought.

Gosling’s performance is the stand-out one here, but a mention also has to go to Angourie Rice, a teen actor who excels as the daughter of Ryan Gosling’s character, a quick-witted and intelligent girl who often comes across as cleverer than both her adult counterparts. Judging on this performance, Rice has a great career ahead of her and it will be interesting to see what she does in future.

It’s definitely true that the plot of the film, which can in loose terms be explained as a detective story that spirals out of control, is convoluted and at times a little silly, but in truth it’s a vehicle for Black to elaborate on the characters he has created and the situation they get themselves in. It’s also a chance for Black to show his appreciation of a bygone era of buddy comedies, making use of the opportunity to indulge in the same crazy plot devices as they may have done in their prime, with as much gusto as possible and with a soundtrack that shows Black’s love for the era, in this case the 70s.

The Nice Guys isn’t perfect, but it’s carried through by an excellent script and fast-paced direction by a writer-director who is unquestionably talented and interesting, and who is able to make you laugh on a very regular basis. Here’s hoping for many Shane Black films to come.