When Gareth Evans burst on to the international scene with ‘The Raid’, a high-powered, ultra-gritty martial arts thriller that featured some of the best fight scenes ever captured on film, it must be said that a sequel that intended to keep up with that level of intensity would be very hard to make indeed. Nonetheless, Evans went forward with it and his new film does indeed manage to maintain a lot of the power of the first, even adding a few other intriguing plot points to the unrelenting action. 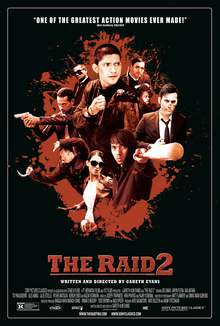 Working once again with Iko Uwais who played main character Rama in the original, he sets out to craft another equally thrilling experience that never fails to impress. Uwais is just as good as he was in the original, brooding and strong and fantastic in every action scene, taking part in one of the best single fight scenes there’s ever been. He’s ably supported by an accomplished cast including Arifin Putra in a role as one of the gang leader’s sons that could easily have slipped in to cliché and indeed would have done if it wasn’t for a fully believable, almost demented and wonderfully cold performance by Putra, who makes us forget the lack of depth behind his character profile and adds to the film’s intensity.

It’s the blend of spying and action that provides this sequel with the difference it needed from the first which was for all intents and purposes a full blown and unrelenting action film. The tension that the amalgamation of genres creates and the new situations and conflicts that result are interesting to see play out, even if some standard gang tropes are dotted around absolutely everywhere in what could have been a grating manner if it didn’t thrill so effectively. What Gareth Evans lacks in character originality he makes up for in a sheer ability to both intrigue and enthral with fantastically filmed sequences that linger long in the memory, and it definitely doesn’t overstay its welcome even at a princely two and a half hour length that could have led it to become so relentless it started to become boring. Evans managed to find a new way to choreograph almost every action scene so as to avoid this and does so very well.

Ultra violent and boasting no delusions of being anything deeper than a straight-up martial arts slogfest admittedly with a few other genre elements, Evans proves that it’s possible to make a sequel that feels like it builds on the first without ever losing its essence. A highly enjoyable and consistently engaging watch that doesn’t disappoint at all. It will certainly be interesting to see what Evans does with his visual style and intense sensibility in between this film and the newly announced ‘The Raid 3’, but he is definitely one to watch, and as is this film.