The true story of Eric Lomax is both a harrowing and a touching one, and seems a perfect fit to bring to the big screen as both an intense and heartwarming story. Director Jonathan Teplitzky decided to take the job on and having recruited the likes of Colin Firth and Nicole Kidman it definitely seemed promising from the start. 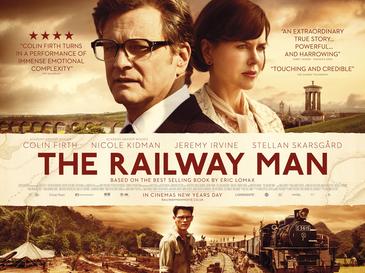 What the film manages to do well is contrast Lomax’s older self and his younger self, ably portrayed by the reliable Jeremy Irvine, and this jarring shift between casual chat about trains and the horrible conditions that Lomax had to face as a prisoner of war of the Japanese in the Pacific is something that truly hits home the effect something like that can have on someone, ruining their lives even after all the terrible events occur. Firth’s portrayal of this is in his typical style. Withdrawn, guarded, quivering and almost neurotically sheltered, it definitely fits in with his past work and is where he has found most of his success, particularly with the exemplary performance in ‘The King’s Speech’. While it’s nothing new here, it definitely has the desired effect. His performance is complimented nicely by the aforementioned Irvine, who masters all of Firth’s twitches and general mannerisms to feel like a true younger version of Firth’s portrayal of the character. While Firth never interacts with Irvine, it feels like he does throughout the movie in the flashbacks, which can often be prone to disconnect since older and younger versions generally don’t match up.

Kidman’s performance is in the same vein as Firth’s, predictable but solidly done, and she serves as a fairly engaging foil to events as Lomax’s bewildered wife, determined to understand the horrors of his past. This is another aspect of the film that is well handled, since Lomax’s struggles are embodied in his changing personality and actions regarding his wife, from the romanticism of how they met to the cold, irrational man spurred on by horrible memories to make snap decisions and switch off from the real world.

‘The Railway Man’ does many things well, and its tale is told in such a way as to make it as emotionally affecting and captivating as possible, but there’s still a gimmicky feeling about aspects of it. Sam Reid and Stellan Skarsgard suffer from a massive disconnect which makes it hard to associate them as the same person through the flashback scenes and as a result some of the impact of the story is diminished, but strong performances to help to overcome this well enough. While the tone may be vastly different in different sections of the film, it only feels forced a limited number of times and generally works to enhance the horrific nature of the state of events in the second world war. It’s not quite the magnum opus it maybe could have been, but ‘The Railway Man’ is definitely affecting, emotional and well acted, and anyone looking for a strong telling of Lomax’s fascinating story should look no further than here.