Coming of age movies often do well because, when successful, they really hit home with their target audience, addressing themes that are very relevant to a lot of teenagers. From the outset, it looked like Jim Rash and Nat Faxon’s ‘The Way, Way Back’ was going to be something of this sort, and not the trashy, puerile or downright condescending sort like ’21 And Over’. 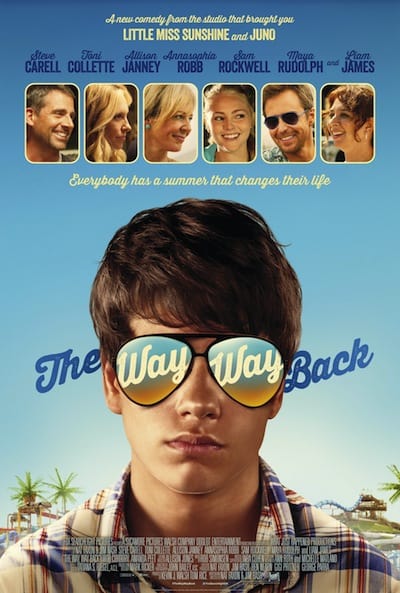 Even if you’re optimistic about its direction, it doesn’t mean that the film will be anything other than formulaic, so it makes perfect sense to go in to the duo’s debut feature without much expectation, but what Rash and Faxon manage is a film packed with charm, wit and emotion in much the same way as Stephen Chbosky’s soul-searching ‘The Perks of Being a Wallflower’ and a very welcome surprise.

Liam James plays lead character Duncan, a moody, introverted 14-year-old who has to endure his mother’s relationship with the passive-aggressive Trent, portrayed without any quirks or frills by Steve Carrell, who feels like a man on a mission seeking to ensure he is remembered for playing more than just a caricature, and actually carries his vindictive, silently aggressive character very well indeed. They certainly make a fantastically dysfunctional family and Toni Collette also puts in a consummate performance as the wacky but sensitive mother Pam.

The star performance despite James’ great turn as Duncan was Sam Rockwell’s however. Rockwell embodies charm and delivers the witty dialogue brilliantly as he becomes the father figure that Duncan doesn’t have from Trent, and shows him that he does indeed have an adventurous side hidden under all the moody glares. He is a joy and essentially holds the film together with consistently funny quips and laid-back charisma that plays perfectly off characters around him. Other cast members like Maya Rudolph and even Jim Rash and Nat Faxon themselves give enjoyable and interesting performances, even if they maybe aren’t the most original.

The film does smack of the 2009 film ‘Adventureland’ in a thematic sense but it improves on that film, which championed itself on its look in to teenage angst, by not being as obnoxious about it and ensuring that we’re always rooting for all the main characters, and that they’re all believable people, which they most definitely are.

‘The Way, Way Back’ may not be the most original film around, and the ‘summer that changed my life’ deal has been overplayed so often it’s a wonder the summer doesn’t have the same dazzling effect for everyone, it’s well written, cleverly directed and always very amusing, and Faxon and Nash do a great job subverting the ‘spring break’ theme so it applies to the adults and not to the kids, who are just as baffled and flustered as you’d expect them to be. For a directorial debut, it is very assured and more touching than the Oscar-nominated ‘The Descendants’, a film that Jim Rash penned, and shows a very interesting progression in his career. We will be looking forward to equally witty films from Rash and Faxon, and are delighted to say that pleasant surprises do still happen in cinema, you just have to look for them.