There aren’t many films that can pull off a title as contrived as the long-winded ‘The Young And Prodigious T.S. Spivet’, but if there’s any director that can do it, it’s the painstakingly original Jean-Pierre Jeunet, whose own curious quirks and tics come to the fore here too. His penchant for almost mechanised movement, as showcased by his most famous film ‘Amelie’ returns here more literally in the shape of a perpetual motion machine, created by main character T.S., played brilliantly by Kyle Cavett and is the catalyst that sets in to motion T.S’s long journey to receive recognition from the esteemed Smithsonian. In typical Jeunet style, he has about as crazy a family as you’d expect, a mother played by Helena Bonham Carter who is obsessed with insects and spends most of her time researching them, a father who is an unapologetic cowboy and who Callum Keith Rennie does a quietly brilliant job of portraying, a daredevil brother and a sister obsessed with beauty pageants. Since they’re almost all opposites of each other in some way, their interactions are consistently amusing but Jeunet does a great job of somehow tying the family together, making for some emotional scenes that don’t feel forced at all. 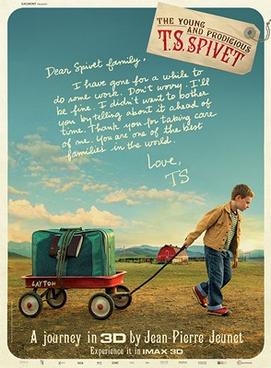 The family dynamic is the best part of the film, and its T.S’s journey that is unfortunately wildly uneven. Trying all at once to be a sort of emotional learning curve for T.S and a satire of fame and the vainness of power-hungry people, it feels a little too disjointed to hold together at times and odd moments such as a baffling cameo by Dominique Pinon as a deranged freighthopper does nothing other than to provide T.S with a phrase he then likes to repeat whenever he can to marvel at the brilliance of it, for some reason. These are the moments when the film can be too twee for its own good, and it’s a welcome relief when it manages to rein itself in afterwards for some amusing scenes that spawn of T.Ss successful invention.

The film definitely isn’t one of Jeunet’s best, but it displays enough in both its script and the quality of its acting to push itself on and become something truly valuable, particularly in the effect it has on an emotional level, which is the area where it succeeds most. Ultimately, it’s a case of too many ideas crammed in to too little space and while some of the other parts do work, they almost feel like vignettes in the vicinity of the bigger picture, and it’s at its best when it is on strong ground as to what it’s about. Wildly uneven, but original enough to take it over the line, and featuring some brilliant acting particularly from the kids, who certainly don’t struggle at all on the big screen. Definitely a teaser for greater things, and we look forward to what Jeunet does next.