Mia Wasikowska is one of the most popular faces in Hollywood at the moment, and despite the array of challenges that have faced her up to now this is probably her toughest role. She plays Robyn Davidson, a young woman who finds release from her life in her plan to cross Australia’s vast deserts from Alice Springs in the North all the way across to the Indian Ocean, a distance of 2,700 kilometres. Since she’s in almost every frame and often on her own, it’s a stern test of Wasikowska’s ability to carry a film, and she performs admirably in what is quite an interesting role. 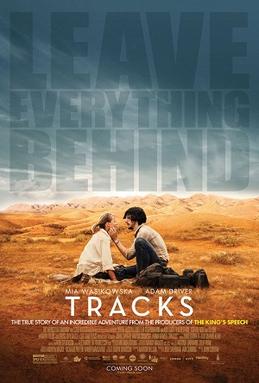 The film itself is competent but not spectacular, often feeling like it suits being a docudrama for a nature channel on TV rather than a feature-length film, its deliberate pace and penchant for romanticising as shown by the non-stop use of panoramic shots of the landscape and plenty of time given to the camels’ nonchalant trotting that come across as beautiful but not necessarily aiding the narrative at all. In that sense, it relies heavily on Mia Wasikowska to show the emotional development of the main character Robyn. To do that, it often uses Adam Driver, playing a photographer who she meets up with during her venture as part of her sponsorship deal as a cipher through which we as the audience can gauge her mood and her feelings about the entire expedition as she progresses ever onwards.

This subtle attempt at cementing the film as the tale of a personal journey has both strengths and weaknesses, embodied by the interactions with Driver and also in the long sequences where there’s no one around but her and her assorted animals. While some of these scenes can be amusing and even poignant, it also sometimes veers over in to a saccharine schmaltziness that makes an appearance only because director John Curran finally decides that maybe the audience needs something to sink their teeth in to in the same dramatic sense as in any other Hollywood drama of this ilk. It would have been better for the film if it played its intentions straight, and this shifting sense of tone does jar.

‘Tracks’ is definitely a solid platform for showcasing Mia Wasikowska’s talent as an actress that can hold a film up almost entirely by herself and has some interesting and involving moments, but it feels like a watered down version of more successful iterations of its kind. There are films that are more euphoric, more exciting, more spectacular and even more refined in terms of running time, but the film does enough well to make it worthy of a viewing, particularly if you’re in to all this personal journey stuff and you’re interested in seeing just what the Australian wilderness is like. Makes the Yorkshire Dales seem like a back garden.