When a film takes as long as this one did to get from the page to the screen, it’s always a worry that the film would get lost in the mire of redrafts and reimaginings that come with a lengthy production process. Jonathan Glazer’s experimental sci-fi seems singular in its goals from the very beginning however, seeking to baffle and captivate as the frames suggest and coax you in to understanding without ever fully revealing their hand. 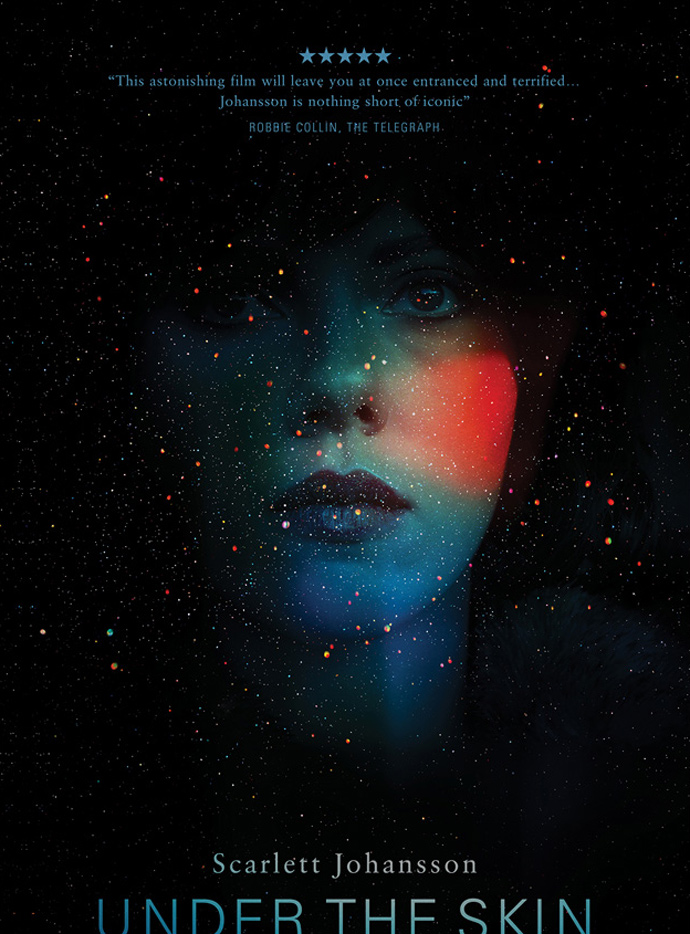 While it’s most definitely a commendable feat in the art and act of film-making for which Glazer and cinematographer Daniel Landin must be congratulated, there’s a cold, inaccessible edge to the entire film that makes it hard to do anything other than appreciate it rather than be truly enveloped by its icy creepiness in a fully immersive way. Glazer definitely gets his main character cast right, as Scarlett Johansson brings everything she can to the role. Her mechanical, off-kilter and ultra-deadpan performance is truly striking in relation to the different situations her character faces, and do make for some genuinely interesting moments, but it’s offset by the film’s insistence on labouring every scene, milking every drop of scenery and every Glaswegian accent in the area as Johansson goes round in her van. That aspect of the film is another  major talking point since we’re told that her interactions with genuine Glaswegians were in some cases used in the film, which shows Glazer’s desire for authenticity and explores a whole new method of obtaining that sense of strangeness that the film holds so dear.

Despite some very clever ideas and a generally solid premise, ‘Under the Skin’ does feel a little bit more like an experiment in style and an exploration of the boundaries of celluloid as opposed to what is presumed is Glazer’s intent, which is to provide us with a chiller with an atmospheric edge, one that doesn’t feel so mundane and yet so important, so uneventful and yet so intense as the film definitely can be. The film, it can easily be said, is for those who readily enjoy cinema that is thick with atmosphere and gushing in cinematic talent both behind the screen and in front of it, but it feels like it’s missing a deeper, more involved element that would make it flow a lot more easily than it does.

Jonathan Glazer will remain an interesting and important director in years to come, with ‘Sexy Beast’ remaining one of the best British crime films, but in this case at least it seems that those critics hailing his work on this film as masterful and declaring him Kubrick’s successor in creating a truly captivating masterpiece may have been a little too generous. ‘Under the Skin’ is a success of sorts, and it certainly has qualities that stay with you after it’s finished, but it’s also bound to alienate a large section of viewers with its deliberate pacing, sparse dialogue and a plot that always threatens to go somewhere and ends a bit inanely. Of course, it’s easy to pass all of those off as intention, and maybe it does all serve a purpose in relation to the film, but it leads to a disjointed effect that spoils the overall experience.

It would be interesting to see if the novel the film is based on is quite as infuriating as it is or whether this take on the whole thing is entirely Jonathan Glazer’s brainchild, but at the very least it is good to see Johansson more than holding her own in what is definitely a very difficult role to pull off well. Feel free to chuck as many superlatives and insults at the film as you like, because the chances are the two together probably best describe this remarkable, flawed oddball.