Film Review: ‘Pirates Of The Caribbean: On Stranger Tides’

Rob Campbell fills Gore Verbinski’s vacated director’s chair to try to steer Disney’s biggest live-action franchise back on course. Fans of the fondly remembered original will be glad to see some of its spunk in evidence here, with the pretty/vacant charisma vacuum previously filled by the widely derided Keira Knightley and Orlando Bloom thankfully a thing of the past. In their place we have a fabulously luscious and lairy Penelope Cruz, striking sparks off Johnny Depp’s initially muted but perennially pleasurable Captain Jack. Despite the best efforts of the director and stars however, ‘On Stranger Tides’ still sails close to being sunk without trace by the exact same faults that its predecessors were awash with. 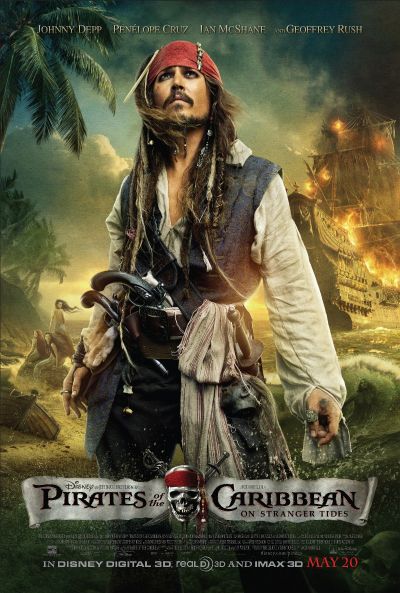 We join Sparrow in London, knee-deep in one of his usual foolhardy escapes. Crossing paths with a fiery flame from his past who has been posing as our pirate hero to recruit herself a crew, Sparrow winds up aboard the zombie-dominated ship of the legendary Blackbeard. Meanwhile, the recently peg-legged Barbossa is locked in a monarchy-sanctioned race against time with the Spanish Armada to reach the mythical Fountain Of Youth. The various disparate groups find themselves thrown together in tangled configurations of alliance and opposition, on a quest to gather the sacred items that will unlock the secret to immortality.

Yep, this latest adventure is every bit as ridiculously convoluted as those that came before; if you stop for a second to try to apply logic to it all you run the risk of your head exploding. It’s just as well then that Campbell keeps the pace brisker than it’s been since ‘The Curse Of The Black Pearl’, no mean feat given the typically bloated running time of well over two hours. The uneventful longeurs of ‘At World’s End’ are conspicuous by their absence, and though there’s nothing quite as spectacular as the monster-heavy set-pieces from ‘Dead Man’s Chest’, the action here is surprisingly well-staged. There’s a commendable reliance on practical effects and stunt-work, with the perhaps budget-influenced use of real locations and – gasp! – real water making events more involving (CGI seas are never convincing).

The cinematography is as spectacular as ever, and for once it’s done further justice by some fairly well-implemented 3D. Whether he has us racing through cobbled streets or creeping through encroaching jungles, Campbell makes the most of his locations, with some gorgeously detailed set design making everything both believable and fantastical. He largely resists the urge to employ fancy camera tricks, hyperactive editing and Peter Jackson-style computer-generated pan-arounds – there is an impressively rough-and-ready feel to this installment. He also avoids the current trend for taking light-hearted franchises in darker directions, despite some intriguing references to religion and voodoo, and the imaginative spins given to some familiar myths; an attack from viciously vampiric mermaids stands out as the film’s most exciting moment.

The acting is strangely variable: old hands aren’t given enough to do to warrant how overly familiar they’ve become – Kevin McNally is everywhere but doesn’t make much of an impression as Jack’s only remaining sidekick, while Geoffrey Rush makes a meal of the scenery but is sadly left trailing in everyone else’s wake until the last half hour. Ian McShane looks the business as Blackbeard, but he’s a bit too plain and nowhere near as villainous as he could be. In supporting roles, ‘This Is England”s Stephen Graham is having a little too much fun as the sort of screw-loose sea-dog we’ve seen many times before, and Sam Claflin is only marginally more appealing than Orlando Bloom was in a virtually identical role.

It’s mostly down to Cruz and Depp that the film is more entertaining than you might expect. She is especially delightful, unpredictably switching from seductive to sword-slinging at the drop of a hat. Depp’s well-worn routine seems slightly flat at the start – you couldn’t really blame him for being fed up of the role by now – but as the plot twists and turns his inspired dandying comes to the fore once more, seemingly galvanised by a series of crowd-pleasing cameos from the likes of Richard Griffiths, Judi Dench and the inimitable Keith Richards. While the ludicrous plot contrivances and excessive length of the film will frustrate many all over again, this is probably the most consistently enjoyable entry in the series since the first. ‘On Stranger Tides’ might not convert any one to Captain Jack’s cause, but it will definitely get his fans back on board for what will no doubt be the first in a series of new adventures.

For more information visit the official Pirates Of The Carribean website.