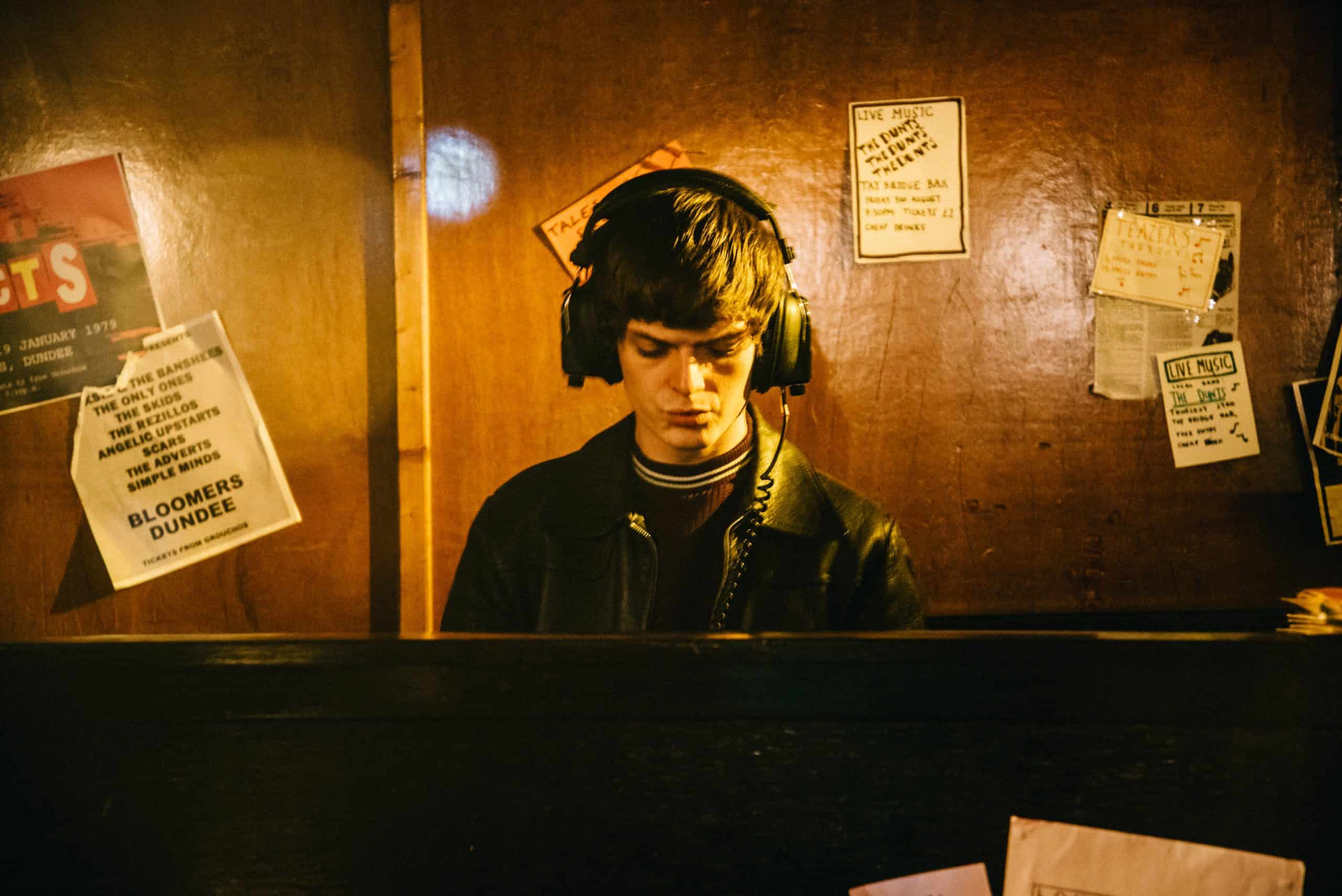 Disclaimer: the reviewer saw this film in the safety of their own home via a screener link provided by the UK distributor, Munro Films.  Before venturing out to a cinema, please read the latest COVID-19 expert guidelines on the risks in doing so. 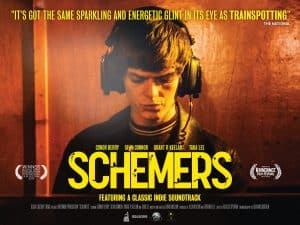 Ah, it’s a tale as old as time!  Boy (Conor Berry) meets girl whilst wasted at a club, boy starts to have sex with girl, girl’s recently-released-from-prison boyfriend returns home mid-coitus, boy gets leg broken by angry boyfriend which kills his dreams of playing football, boy falls for smoking hot student nurse (Tara Lee) looking after him whilst he’s hopped up on morphine, boy cobbles together student disco with his spacey dealer best friend (Sean Connor) and a married wannabe DJ (Grant Robert Keelan) in order to impress student nurse, student nurse tells boy she’d be much more impressed if he booked actual bands, boy gets his friends to start Dundee’s biggest homebrew concert promoter outfit and soon runs afoul of local gangster (Alastair Thomson Mills) who has an exploitative stranglehold over all of Dundee’s major businesses.

That boy is Dave McLean, a chancing gig promoter originally from Dundee who built up quite a rep for himself at the turn of the 80s that eventually lead to a three-decade long career in the music industry, nowadays perhaps best known for managing Placebo.  This here is an independently-produced biopic about those early days, specifically the ones leading up to him successfully booking a fast-rising Iron Maiden to play Caird Hall, co-written and directed by the man himself, and, as the opening titles state, “proudly made in Dundee.”  Aiming for the midpoint between Michael Winterbottom’s classic Tony Wilson biopic 24 Hour Party People and the sprightly mostly-light-hearted japery of early Guy Ritchie gangster movies, McLean’s debut turn behind the film camera (in any capacity) is diverting enough but fails to leave any lasting impression and ultimately feels forever half-cocked. 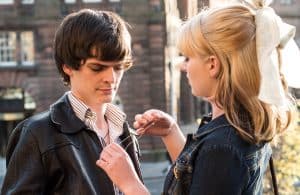 Call it mismanaged expectations, but when presented with a prospect such as this – a biopic about a rock concert promoter’s early days, directed and co-written by the man himself – I was honestly hoping for one of two extremes.  Either a giant self-indulgent self-aggrandizing printing of the legend that’s big and broad and bullish but also kinda charming for exactly those reasons, the tact that Winterbottom’s 24 Hour Party People took despite Tony Wilson not being creatively involved.  Or a nitty-gritty wheeler-dealer look at the scrappy realities of building up a rep and putting on shows as a nobody in a nobody town built from McLean’s specific litany of personal experiences.  Schemers doesn’t go for either and seems pretty content to do a barebones Brit dramedy biopic where scenes are zipped through a lightning speed when they’re not just montaged, characters aren’t all that well defined and could have been cut from the cloth of any similar coming-of-age flick, and copious amounts of Trainspotting-esque voiceover are required to fill in or jog the narrative blanks littered about the place.

It’s a film which lacks specificity or anything to make it worthy of remembrance even 30 minutes out from viewing.  In fairness, I get the feeling some of that is a reality of attempting to tell this story with a shoestring Indie budget being stretched as far as it can possibly go, even with a likely expensive licensed soundtrack constantly chugging along underneath.  Every club shot is conspicuously the same as every other club shot with the same 14 extras trying to make the place look more packed than it is, important stunts near-exclusively occur off-screen, ditto resolving certain key plot threads; stuff like that.  I’m not knocking the film for this; in fact, I really respect McLean’s efforts to try and hide the enforced shortcomings by jacking Danny Boyle’s arsenal of Trainspotting tricks in an effort to enliven proceedings visually (sometimes it even kinda works).  I will, however, knock McLean for having multiple shots out of focus, inconsistent audio levels that can sometimes turn dialogue to mush, and a few terribly EQ’d instances of jarring ADR work which make the enterprise feel rather sloppy and amateurish at times. 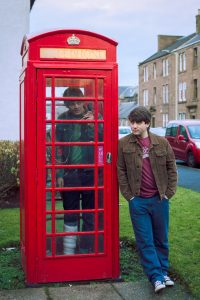 There are two scenes where Schemers manages to come alive, though, and demonstrate the fun rollicking ride such a film could have been.  Not coincidentally, they both involve Davie having to actually, you know, grind and promote through his wits and charm.  The first sees him sat in a café with his associates blagging his way into a business deal with a major London promoter to get Iron Maiden to play at Caird Hall; a boy out of his depth yet charging on anyway with gumption and ambition, calculating the travel fees on an old AA map via sausage lengths, and generally faking it til he makes it.  The second is a stretch of the third act when the reality of Davie’s charge smashes him in the face with a giant tour bus and he has to sprint around Dundee calling in favours and roping in random guys off the street to satisfy an understandably very grumpy tour manager curious as to where the crew, rider, and money he was expecting are.

Surprise, these brief scenes have the specificity and detail that the rest of Schemers lacks – bizarrely, almost every other one of Davie’s gigs are relegated to montages where he says a name into a payphone followed by a rudimentary poster slapping up on the wall with the band’s name and a date; I wasn’t aware gig organisation was that easy.  They also allow newcomer Conor Berry to flex some of his evident rogue’s charm in visible scenes, rather than having to do what he can through voiceover.  The rest of the film, in the meat of the matter, is a generic small-town coming-of-age dramedy with not particularly interesting characters, some funny lines but nothing side-splitting, and a setting that I didn’t get any unique vibes or feel from despite not (to my knowledge) having seen a film set in Dundee before.

Schemers is not a bad film by any stretch of the term, I found it perfectly pleasant enough viewing, but it is a wholly unremarkable one.  I wanted more risks, more energy, more detail – in characters, in the depiction of Dundee, in lived experiences featured in-film – than McLean seems willing or able to provide, and that’s a shame.

Schemers is playing in cinemas nationwide from today.